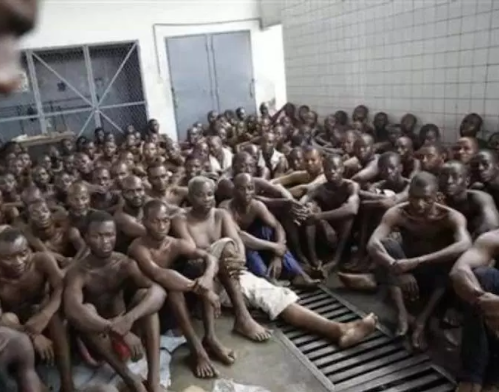 There are indications that the number of prison inmates awaiting execution across the country has hit 2,277.

According to a special report by New Telegraph, It was also gathered that the number of awaiting trial inmates now stood at 48,702, with the total population of inmates rising to 71,443. It will be recalled that as at December 2016, the condemned inmates’ population stood at 1,440.

The implication is that, between December 2016 and now, an additional 837 suspected criminals had been sentenced to death. According to a senior security source, the rise in the number of inmates on death row was a potential threat to prisons security in particular and national security in general.

He explained that considering their fate, the condemned inmates have the potential of instigating security breaches of whatever form, knowing that no punishment could be worse than what stares them in the face. “After enquiry, I can tell you that the current population of inmates on death row is 2,277.  “There is an increase of over 800 between December 2016 and now, and this calls for worry. “I say this because intelligence had revealed in the past, that they (condemned inmates) may have masterminded some past jailbreaks and other breaches,” the source said. Asked to disclose the total inmate population, he said: “The total population of inmates in prisons across the country is 71, 443, out of which 48,702 are awaiting trial.”

In Ogun State, no fewer than 254 inmates are on death row. As at last year, 90 inmates in Kaduna Prisons had been condemned to death for offences ranging from murder, armed robbery to rape. In Lagos, 202 inmates are on death row while there are 179 condemned inmates in Enugu Prison. On the way out, the source maintained that: “First, let governors be courageous enough to endorse death warrants for eventual execution of those whose appeals have ran out. “In the alternative, the National Assembly could initiate amendment to the constitution, to possibly remove capital punishment therefrom.”

The Public Relations Officer, Nigeria Prisons Service, Mr. Francis Enobore, a Deputy Comptroller of Prisons, confirmed the report in a text message. Meanwhile, the Federal Government has raised the alarm over the sorry state of Port Harcourt Prison, lamenting that the facility turns inmates into animals.

To buttress its point, it said the formation, which was conceived to hold 800 inmates, now accommodates 5,000. Minister of Interior, Lt.- Gen. Abdulrahman Dambazau (rtd), who made the startling revelations yesterday in Abuja, further lamented that the state of Port Harcourt Prison, is a microcosm of the general neglect of the sector. Dambazau represented Vice President Yemi Osinbajo at a public presentation of three volumes of Prison Survey Report (PSR) compiled by the Nigeria Prison Service (NPS), as well as the Prisoners Rehabilitation and Welfare Action (PRAWA).

The Speaker of the House, Rt. Hon. Yakubu Dogara, mandated the committees to report back in six weeks. This was sequel to a unanimous adoption of a motion by Rep. Olufemi Fakeye (Osun -PDP) at plenary on Wednesday. In the motion, Fakeye said that the level of congestion in prisons across the country had become so alarming that they no longer served as correctional facilities or reformation centre for inmates. He said that information from the Prisoners’ Rehabilitation and Welfare Action (PRAWA), as well as the Nigerian Prison Service (NPS) showed that only 21,354 inmates, comprising 21,009 males and 345 females, were convicts.

The lawmaker said that the remaining 46,756 inmates, comprising 45,765 males and 991 females, were still awaiting trial. He said that due to high congestion in virtually all the prisons, the inmates were exposed to risks of epidemics, jail breaks, lack of reform, transmission of bad habits and crime techniques by hardened criminals. He said that anti-social behaviours and moral decadence, ranging from homosexuality to other forms of human abuses had also become common features of the prisons. According to the lawmaker, congestion in the prisons has become so acute that many cells meant to accommodate about 50 inmates now accommodate up to 150 inmates. “For example, the Kirikiri Maximum Security Prison in Lagos, built to accommodate 956 inmates, is now occupied by over 2,600 inmates,” the lawmaker said.

Title : 2,277 Nigerians currently await execution
Description : There are indications that the number of prison inmates awaiting execution across the country has hit 2,277.   According to a special report...
Rating : 5
Related Posts: Entertainment, News