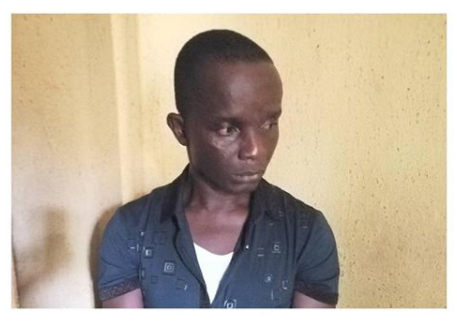 A 46-year old ex-convict, Surajudeen Balogun, has been arrested by the Ogun State police command, for allegedly impersonating the state Director of Finance on Facebook. .

According to Premiumtimes, Balogun was also accused of attempting to dupe a female police officer on the Facebook page. The suspect, a fashion designer, posed on Facebook as a staff of NNPC with the picture of the said finance director and had been defrauding unsuspecting members of the public. .

Balogun was earlier convicted for duping a woman, Bimpe Akinmade, of N950, 000, having claimed to be an NNPC staff based in Port Harcourt. As soon as he came out of prison, he started his nefarious activities again. Luck ran out on him when he was trying to defraud another woman on Facebook under the same guise, unknown to him that the woman is a police officer.

The officer played along with him until Saturday, February 17, when he was arrested while trying to collect money from her.