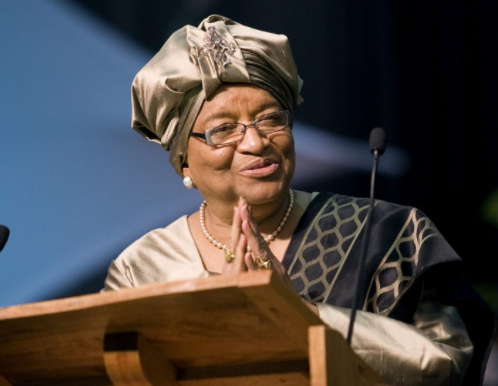 Sirleaf, who served two terms as Liberia's president, was recognized for leading the country's recovery from years of devastating civil war, according to the Mo Ibrahim Prize committee. A Nobel Peace Prize winner, Sirleaf was Africa's first female president and the first woman to receive the prize, which celebrates African leaders who have strengthened democracy on the continent. "Ellen Johnson Sirleaf took the helm of Liberia when it was completely destroyed by civil war and led a process of reconciliation that focused on building a nation and its democratic institutions," said committee Chairman Salim Ahmed Salim.

Launched in 2007, the Mo Ibrahim Prize for Achievement in African Leadership is awarded to democratically elected African presidents and prime ministers who have left office within the last three years.

Previous winners include former Botswana president Festus Mogae, in 2008 and Mozambique's former president Joaquim Chissano, in 2007. But on six occasions the prize has not been awarded, with no eligible candidate deemed worthy.

Ibrahim, a Sudanese-born telecommunications businessman and billionaire, created the foundation bearing his name in 2006. It uses 88 criteria to rate the governance of African countries. The $5 million prize is distributed over 10 years and winners receive $200,000 every year for life thereafter.

0 Response to "Africa's first female president, Ellen Johnson Sirleaf, has been awarded a $5 million prize for excellence in leadership"