» Entertainment » News » ''I am a member of APC but if Benue people want me to defect to PDP, I will'' Governor Ortom says

''I am a member of APC but if Benue people want me to defect to PDP, I will'' Governor Ortom says 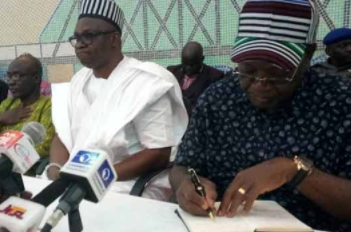 Benue state governor, Samuel Ortom, yesterday said that he will defect from APC to PDP or any other political party if his people so wish. Ortom said this yesterday when he received Ekiti state governor, Ayo Fayose who paid him a condolence visit over the killing of 78 persons by suspected herdsmen in January. Governor Fayose in his speech, called on Governor Ortom to leave APC and move over to PDP where he will be well catered for. He accused the Buhari-led government and the APC of neglecting one of their own states.

In his response, Governor Ortom said he will defect to anyother party if his people so wish him to.

''I am a member of the APC but I cannot keep quiet when my people are being annihilated, I will not accept that because I cannot be Governor over dead people. I’m not a dead man either. The responsibility of enforcing the law is that of the federal government. That is why I have joined the voices calling for the restructuring of the country. Because we cannot have an IGP who is the mouthpiece of Miyetti Allah. And we cannot have a minister who should be protecting the territorial integrity of this country coming out to say it is foreigners that are responsible for the killings. We cannot have a security architecture that is not ready to protect lives and property. That allow herdsmen carry guns and displaying it openly. Today herdsmen have also taken over kidnapping in the country from North to South because they have guns and are being protected by the IGP and when you talk they start calling you names. I must send a message that Samuel Ortom is not a drowning man. I was a nobody but God lifted me to several important position in life, so I know where I’m coming from, I’m not a drowning man. I dropped out of school in 1979 but I hold a Doctorate Degree today. After passing through several leadership positions in this country today I am a Governor and I’m doing my job. Now it is clear that our country must be restructured for the tenets of rule of law to be respected. Any herdsmen that is not comfortable with the grazing law should go to Kano where the Governor has requested that they come. Today because of the activities of herdsmen in Benue state over 60,000 of our children can no longer go to school and are residing in seven IDPs camps across the state. They have truncated the education of our children. It very painful. To compound the problem the crisis in Cameroon has spilled to Kwande and we have opened two camps where 7,000 persons are being housed, so on the whole we have nine IDPs camps in Benue state. After the killings of the 73 people the killings are still continuing almost on a daily basis and more people are coming into the IDPs camps. “Though I read that Mr. President has approved the deployment of the military, I thank the President though I have not been communicated officially but I hope it will help in restoring peace and normally. Regrettably his directive to the IGP to relocate to Benue was not obeyed and he also failed to do his job. We are calling for his resignation. Such people cannot work for Mr. President he needs better people to assist him including the Minister of Defence. These are bear footed people who have nothing to offer. I commend the National Assembly for rejecting the biased report of the IGP which portrayed him as the mouthpiece of Miyetti. I am a member of the APC and about the issue of joining another vehicle, Benue people are here and they are hearing you. I cannot decide for Benue people, the people will decide, it is what they want that I will want. Anything Benue people say I should do, I will do.” he said

Title : ''I am a member of APC but if Benue people want me to defect to PDP, I will'' Governor Ortom says
Description : Benue state governor, Samuel Ortom , yesterday said that he will defect from APC to PDP or any other political party if his people so wis...
Rating : 5
Related Posts: Entertainment, News

0 Response to "''I am a member of APC but if Benue people want me to defect to PDP, I will'' Governor Ortom says"