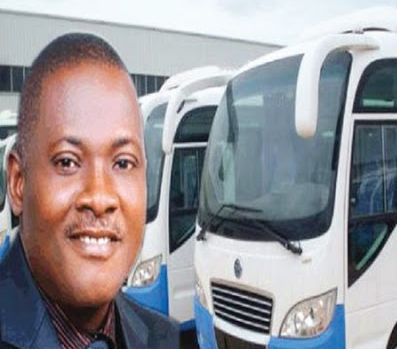 Chairman of Innoson Group, Chief Dr innocent Chukwuma popularly known as Innoson has stated that as a law abiding citizen, he's not afraid of arraignment in the court but he must be arraigned through the due process of law.

Innoson stated this today tthrough Cornel Osigwe, the Head of Corporate Communications
for Innoson Group while receiving the news of issuance of bench warrant against him today by State High Court Ikeja.

In a ruling by Justice Mojisola Dada, the court ordered that Innoson should be arrested and kept in custody a day before the next adjournment and be produced on the adjourned date, March 14, 2018 for probable arraignment over alleged forgery.

In a related development, the spokesperson of Innoson Group, Cornel Osigwe reacting to the issuance of bench warrant against Innoson stated that the decision of Justice Mojisola Dada was done in bad faith because the judge did not grant the counsel to Innoson, Prof J.N Mbadugha Esg a fair hearing.

During the court proceedings of today Prof Mbadugha invited the attention of the court to the motions pending in the matter, viz:

• that the charge is an abuse of process because a similar charge on the same subject matter is pending at the federal high court Lagos division between the same parties in charge no FHC/l/565c/2015;

• a motion pending at the court of appeal to stay commencement of proceedings and execution of the court’s order of 17th January 2018;

• a motion that the court recuse or disqualify itself from further conduct of the proceedings; and a motion that EFCC cannot be heard in any application until it withdraws the charge given a pending motion against it praying that it be restrained from filing any charge in respect of the same subject matter of the charge that was struck out until the determination of the appeal against the court’s order striking out the previous charge- Charge No. ID/197c/2013.

Prof Mbadugha also informed the court that the 3rd defendant has not been served and as such the court lacked the jurisdiction to entertain the matter.

All the submissions of Prof Mbadugha to the judge were not granted, however the judge granted the plea of the counsel to EFCC who prayed the court to issue a bench warrant against Innoson. The issuance of bench warrant led to a wild jubilation by some staff of GTB and their lawyers who were fully seated in the court.

It must be stated that based on the submission of Prof Mbadugha, counsel to Innoson, the judge erred in law by making an order to issue a bench warrant against Innoson.

The court is bound by law to listen and decide the applications submitted rather than making an order to arraign Innoson in a charge that is an abuse of process.

Osigwe have previously maintained that the EFCC charge which is being instigated by GTB is a gross abuse of process. First, an earlier charge which GTB induced the EFCC to file against Innoson was struck out. Innoson appealed against the order striking the charge out on the ground that it ought to be a dismissal and not striking out. The appeal, with Appeal No: CA/L/1328CM/2017 is, till date, still pending when EFCC filed or re-filed, in December 2017, the same charge that was struck out. Secondly, the charge is on the same subject matter and the same party as Charge No: FHC/L/565C/2015 that is pending at the Court of Appeal, Lagos Division, in Appeal No: CA/E/249C/2016.

Both charges are smear campaign by GTB and EFCC to destroy Innoson.

Title : "I am not afraid of arraignment before the court" - Innoson reacts following the issuance of his arrest warrant
Description : Chairman of Innoson Group, Chief Dr innocent Chukwuma popularly known as Innoson has stated that as a law abiding citizen, he's not afra...
Rating : 5
Related Posts: Entertainment, News