» Entertainment » News » ''Cattle colony is tantamount to modern slavery, we cannot have that in Oyo State'' Governor Ajimobi says

''Cattle colony is tantamount to modern slavery, we cannot have that in Oyo State'' Governor Ajimobi says 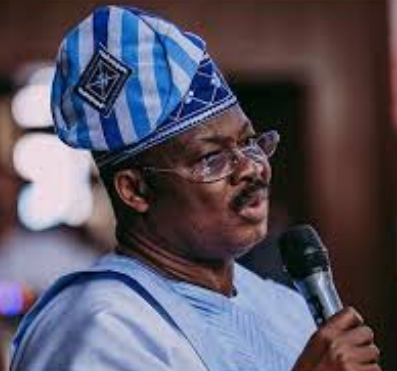 Oyo state governor, Abiola Ajimobi, has joined other state governors to kick against plans by the Federal government to establish cattle colonies in different states.

Minister of Agriculture, Audu Ogbeh, last month dosclosed that as part of eforts to stem the tide of herdsmen/farmers clashes in various states, the Federal government is planning to establsih cattle colonies in different states. States are meant to provide the lands where cattles will graze.

Oyo state government in a post shared on his Facebook page this morning, says cattle colony can be likened to mordein day slavery. He wrote;

''Cattle colony is tantamount to modern slavery, because colony is synonymous with colonization. We cannot have that in Oyo State. It is a pointer to the fact that federalism is not working in Nigeria. If poultry farmers or owners of piggeries, among others, are not being offered colonies for their own livestock, why should herdsmen be a survival category. Our position is to support controlled ranching, under which we will provide land and other basic modern facilities for good cattle business as well as breeding. Those wishing to rear cattle will use the facilities at moderate cost. No more, no less.”. 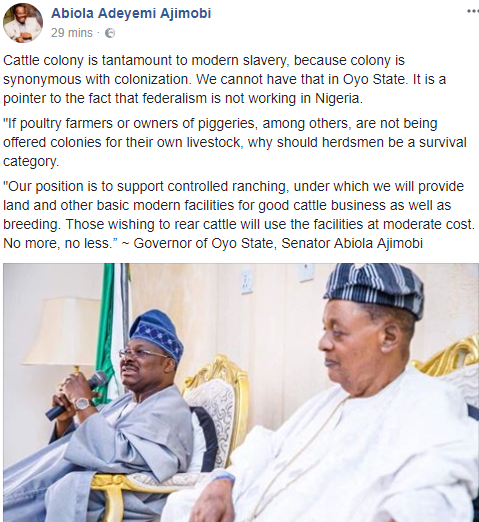 0 Response to "''Cattle colony is tantamount to modern slavery, we cannot have that in Oyo State'' Governor Ajimobi says"