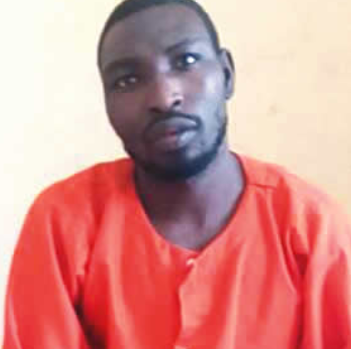 The Federal High Court sitting in Wawa Cantonment, Kainji, Niger State, yesterday February 12th, sentenced 35-year-old Haruna Yahaya pictured above, to 15 years imprisonment for participating in the abduction of the Chibok school girls and other terrorism offences. Yahaya had pleaded guilty to the charges of terrorism filed against him by the Federal government.

AT the hearing of the case, Yahaya asked the court to be merciful in its judgment. He told the court that members of the sect had come to his shop to force him to join them and he joined because he feared they might kill him. He said the sect members accosted him at his shop in Damboa where he was selling his goods.

He told the court that on the day the Chibok school girls were abducted, one of the girls, Mariama, pleaded with him to free her but tat he told the girl that himself was also abducted by the sect members.

The court ruled that it would not be fooled by Yahaya's claims. He was afterwards sentenced to 15 years in jail.