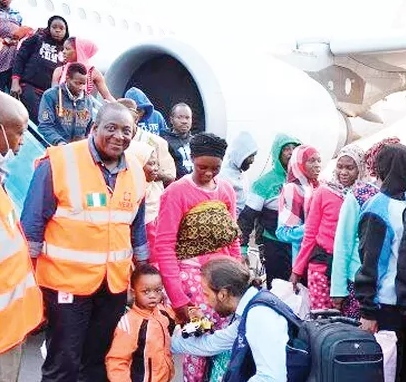 This is as the Presidential Committee on North East Initiative (PCNI) stated that it has inaugurated a free medical intervention in Mubi to cover about 15, 000 returnee IDPs in Adamawa State.  Speaking with journalists when he received the returnees, Ejike said the returnees arrived at Port Harcourt International Airport, about 12.25 a.m. on board Max Air.

Ejike said that the evacuation of Nigerians stranded in Lybia had been a huge success in spite of some challenges in Libya during the negotiations for their return. He said the Federal Government had put every mechanism in place to fast track the evacuation of the returnees.

He said: “I am happy that the last set of returnees at the centre were all taken back to their various states on Jan. 15.” Ejike said the agency would contact state governors for prompt evacuation of the returnees from the Port Harcourt centre. Also, the Public Relations Officer (PRO) of Max Air, Mr. Muhammad Dahiru, said the evacuation of the returnees from Libya, was hitch-free. Dahiru said: Actually, we did not have any security challenges in Libya.  We landed in Libya about 7.30 and spent only one hour and 30 minutes before we took off from there back to Nigeria.”

He said so far, 1, 955 returnees had been brought back to Nigeria by Max Air out of 3, 138 expected to be brought home through Max Air. “I can assure you that we can bring all the returnees back to Nigeria within 48 hours if we are invited to come and carry them,” Dahiru said.

One of the returnees, Osita John, thanked the Federal Government for rescuing them and fulfilling its promise of bringing Nigerians home. John described his experience in Libya as horrible and unforgettable and advised Nigerian youths still nursing the idea of travelling out of the country illegally to drop it. He called on the Federal Government to continue with the evacuation to save many Nigerian youths still in different prisons in Libya.  “There is no place like home but I beg our leaders to make Nigeria a better place for us, the youth, to live,” he said.

The Federal Government has identified 5, 000 Nigerians currently trapped in Libyan detention camps. Meanwhile, the Vice Chairman of PCNI, Alhaji Tijjani Tumsah, who disclosed this during the inauguration of the Outreach Programme at Mubi General Hospital, said the programme was part of President Muhammadu Buhari’s plan for health care delivery meant for vulnerable Internally Displaced Persons (IDPs) and residents in host communities in the North-East.

He said: “Initially, the programme was designed to capture no less than 5,000 returnee Internally Displaced Persons from the most affected seven local government areas in the state. “But because of the mass turnout of the people who are in serious need of medical help, the initiative decided to open its data to capture more people.”