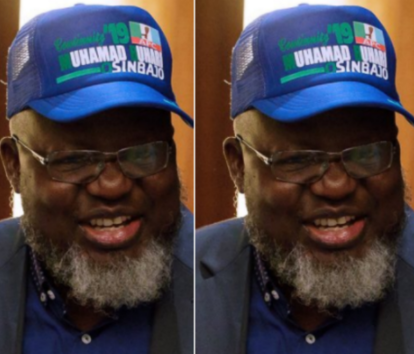 What we did was to open the South-West Zone …What we did with the caps was to say this man must possibly contest in 2019. We must start preparing for the campaign. One of the things we would need are face caps for the campaign and we need samples of the campaign materials for potential supporters and the samples were what we brought to the meeting.  It is to prepare for the future. Again we tried to use that occasion to publicise some of the achievements of Mr. President.  Over the last one or two years, a number of PDP apologists have continued to engage in misrepresentations and falsehood against the government, especially in the area of performance and achievements. And we thought it was fit for us to itemize the achievements of the government, which is what we said and we continue to say it that what the Muhammadu Buhari-led APC government has done in two years, the PDP governments did not achieve in 16 years. We only pity people who do not see what we have done. If you look at the last election for example, he (President Buhari) did not have access to all the monies that the sitting President had at that time and, yet, he emerged victorious'' he shared

“That should convince anybody that his emergence is an act of God to take Nigeria to where it should be.”

Title : ''APC has done more than PDP achieved in 16 years'' Minister of Communications, Adebayo Shittu says
Description : The Minister who is currently handling the campaign for President Buhari's election in the South West, said this in a new interview with...
Rating : 5
Related Posts: Entertainment, News