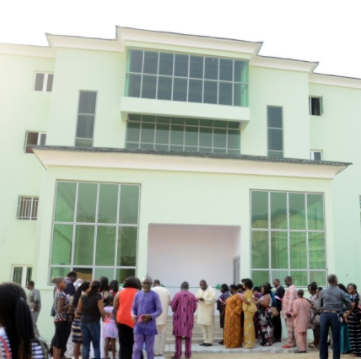 The Nation reports that the video was played during the testimony of Miss Olive Ogedengbe, a clinical psychologist, at the trial of Adenekan over defilement of a child.

The video recording (Exhibit A1), depicted the child, named Child X,  in the clinical psychologist’s office on Nov. 28, 2016 answering questions about the alleged defilement from Ogedengbe and her colleague. In the recording, Child X was given a sheet of paper and asked to draw the private part of Adenekan, which she did as well as another image with the ensuing questions.

Child X, referring to the other image said:”that is the hand he used to put in my wee wee.

“Ogedengbe: “Where is Mr Adenekan’s wee wee?” Child X in response, pointed to her private area.

Child X in the recording, using a teddy bear as a puppet, also showed how the supervisor allegedly sexually abused her friend (name withheld).

Ogedengbe, before the video recording was played in the courtroom, in her testimony while being led by Mr Jide Boye, the Chief State Counsel, narrated to the court what had previously transpired during her interaction with the child.

She said:”The mother came into my office with a referral letter from the Lagos State Domestic and Sexual Violence Response Team (DSVRT) and narrated the story and she started crying. She (the mother) said she did not know the reason why this was happening to her. She said she was usually over protective of her children and follows them everywhere except school. She said somebody in her church handed her a book on sexual education for children which she read and decided to practice it on her child. That was when the child disclosed that she has been defiled. She told her mother that Mr Adenekan comes to take her out of the class and shows her some videos that are sexually stimulating. She pleaded with us to help to correct the psyche of her child. I carried out an independent psychological evaluation on the child. I asked the mother to sit at the corner of the room and myself and my colleague interacted with the child. We did not directly start interrogating the child as that was against the ethics of our profession. We started an initial interaction with the child to make her relax and gain her trust. When our trust was gained by the child and she was in a happy frame of mind, I asked the child:”who touched your wee wee?” and the child repeated on several times `Mr Adenekan’. I was shocked because I did not expect it from a child her age. I brought out my assessment sheet and I told the child to draw any person that comes to her mind. She restlessly started jumping around “Mr Adenekan is on my mind” we got her back to being settled but she continued talking without yet drawing. She (Child X) said “Mr Adenekan said it is good for a child to put her wee wee in Mr Adenekan’s wee wee” at that point in time we decided to do a recording to ensure her story remains consistent. We asked her how does Mr Adenekan’s wee wee look like and she demonstrated playfully by pointing her finger upwards stating “sharpener”.

“We asked sharpener or pencil? She stated `sharpener.’

We told her to draw Mr Adenekan’s wee wee. We want to see what it looks like.

“To my greatest shock and surprise, for a two-year-old child, she drew a picture which symbolises a reproductive organ of a man in the form of a penis.

“I then asked her, show me your wee wee, she pointed at her private part. I asked her to show me where Mr Adenekan’s wee wee is and she pointed at the lower region of her private part.  By then the child was again getting very restless and she ran to her mother who was at the corner of the room. We still wanted to hear more but she was playfully running around and her mother started probing her: “Is it only you he comes around to take out of the class” and she replied no. The child said it was herself and her friend (name withheld) so her mother asked her to show us what he normally does with her friend.”The child said he kisses her bum bum and he licks her bum bum, the child demonstrated by using a puppy in the room. That was the end of the first interview with the child.”

Ogedengbe during her lengthy testimony said from her evaluation, the mother and Child X needed psychological help.

She said:”Afterwards, I decided to confirm from the mother if the child was exhibiting any symptom of psychological abuse. I asked the mother if she observed any strange behaviour in the child and the mother said yes. I had asked because I noticed in the course of interacting with the child that the child was occasionally aggressive. The mother confirmed this and also stated that the child had sleep problems and had been having nightmares.”She also complained of sexual inappropriate behaviour from the child and that after the incident the child became curious to see naked bodies of people. From my findings I found the child exhibited aggressive behaviour, inappropriate sexual behaviour, sleeping problems and fear. After the interaction, myself and my colleague realised that the child and mother needed help. The mother also exhibited signs of post-traumatic stress disorder. We decided to do an intervention and we held two more sessions of psycho-social intervention for the mother and the mother was counselled on how to help and assist the child.”

While being cross-examined by Mr Olatunde Adejuyigbe (SAN), Ogedengbe said that Child X was not tutored on what to say during the interview by either her or Child X’s mother.

“We used projective techniques in which a client projects their subconscious minds on paper.”

The clinical psychologist revealed to Adejuyigbe that she visited the mother of Child X’s friend who was also allegedly sexually assaulted by Adenekan.

“We saw the mother of the child’s friend but she was not willing to get involved in the case because of stigma,” she said.

Ogedengbe also added that she did not interview the staff of Chrisland School, Child X’s father and her older sister. The clinical psychologist also insisted that the child was of above average intelligence.

“Children 0-5 years, are usually not able to form full sentences, the child could string meaningful sentences. In drawing a picture, most children her age do not draw meaningful drawings but she did. I have worked with children her age from diverse sections of society and she is of above average intelligence,” she said.

On re-examination by Boye, the prosecutor, Ogedengbe insisted that the child was not tutored.

“If a child is being brainwashed or tutored, the child won’t be consistent in answering several questions. You will see it in her non-verbal behaviour that she was tutored, there would be no flow of conversation, this child was not tutored,” the clinical psychologist said.

Section 137 of the Criminal Law of Lagos State, 2011 prescribes a life sentence for the offence of defilement of a child.

Justice Sybil Nwaka adjourned the case till March 21 for continuation of trial.

0 Response to "Heartbreaking video! 2 year old girl narrates how her 47 year old school supervisor allegedly sexually assaulted her at their school in Lekki"