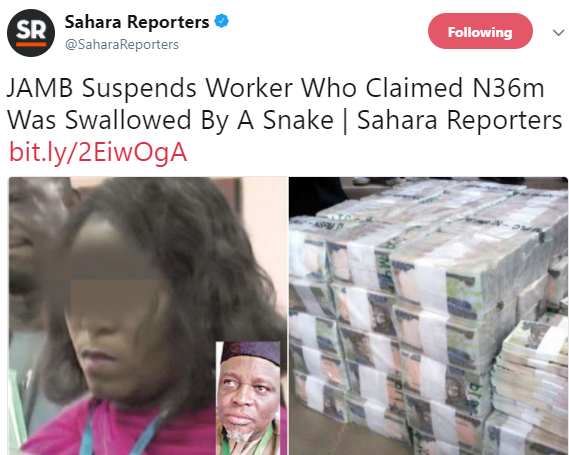 The management of JAMB has said all its staff involved in the case of the mysterious snake that swallowed N36m belonging to the examination body, have been placed on interdiction pending the outcome of the ongoing investigations.

The JAMB Head of Information, Fabian Benjamin, revealed that the board was taking Philomina Chieshe, through other disciplinary measures while security agencies were investigating the matter. .

He said; “There is nothing new about the development. It is just one of those cases discovered by the new leadership of JAMB under Prof. Is-haq Oloyede. So the revelation is a result of the new regime of transparency and accountability.

She has been suspended and she is going through all other disciplinary procedures while investigation is ongoing on the matter. Her claim was that a snake came into the office and swallowed the N36m proceeds.” .

It was learnt that Chieshe explained in her statement that a “mystery snake” sneaked into JAMB accounts office and made away with the N36m cash. The money was said to be from the purchases of scratch cards from JAMB state offices and other designated centres. .

A team of auditors was said to have been dispatched to different state offices of JAMB to take inventory of sold and unsold scratch cards and recover the generated money. The woman reportedly told the team that she could not account for N36m made in the previous years before the abolition of scratch cards. .

The Minister of Finance, Kemi Adeosun, had last year, said JAMB for the first time remitted N5billion to the government’s coffers with a promise to pay the balance of N3bn, compared to maximum N3million remitted yearly in the last 40 years. .

Adeosun had said the disparity in the remittances of agency in the past had necessitated the decision to probe all previous heads of the two agencies.

Title : JAMB suspends Philomina Chieshe and other workers over N36m swallowed by 'snake'
Description :   The management of JAMB has said all its staff involved in the case of the mysterious snake that swallowed N36m belonging to the examinatio...
Rating : 5
Related Posts: Entertainment, News