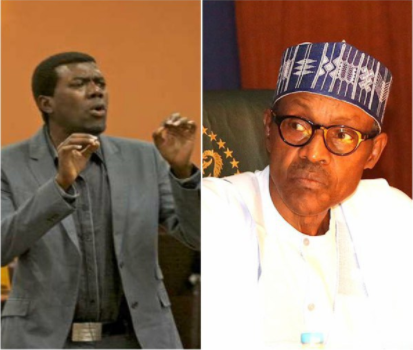 President Jonathan's former aide, Reno Omokri in his weekly piece titled, 'Jammeh, Mugabe, Zuma, Buhari?' says 'everyone knows Buhari cannot win a free and fair election, pause from watching #BBNaija and do everything to get your PVC'.

Read his full aritcle below...

The news that the South African President, Jacob Zuma was resigning with immediate effect came as a bolt of lightning on Wednesday the 14th of February. It was a Valentine’s Day special for all of Africa. Apparently, to stave off a vote of no confidence in him by his own party, the African National Congress, Zuma, quit the stage while the ovation was lowest.

In the space of just a little over a year, Africa got rid of some of its worst-performing leaders (if you can call them that). First Jammeh, then Mugabe, and now Zuma. The funny thing is that Zuma was one of those that negotiated Mugabe’s exit, not knowing that he was giving a dress rehearsal to those who would also plan his own exit a mere three months later.

But is the domino effect over? With Presidents Obasanjo and Babangida’s vote of no confidence in the incumbent Nigerian President Buhari, I see him going the way of the other gerontocrats who have recently fallen from grace. The thing is that both Presidents Obasanjo and Babangida represent President Buhari’s primary constituency, the military. Anyone, like Bola Tinubu, who is whispering sweet nothings to the President’s ears that the duo are of no consequence is a court jester that will lead the President to his political Waterloo! But the vote of no confidence does not just end with the duo that Tinubu wants to consign to the retirees’ club.

On the same day that Zuma resigned to avoid a vote of no confidence, the Nigerian Senate voted to reorder the order of the 2019 elections to make the Presidential elections come last instead of first. Anyone who knows Nigeria, knows that this spells doom for the President. His attempt to intimidate his fellow Fulani brethren who is the Senate President, has failed woefully. And as a Fulani well versed in Pulako, Senate President Bukola Saraki is determined to get his pound of flesh!

What the Senate did by reordering the order of the 2019 elections is similar to what the ANC did to Zuma. It is a vote of no confidence. It is a RED CARD to Buhari. A sign of his rejection by his own party, which also happens to be the majority party in the National Assembly. Africa’s time to boot out failed leaders seems to be NOW! And the President is such a silly politician. He does not have the clout that Obasanjo has, neither does he have the charm that Babangida has. He is such a clumsy political operative. Look at how obviously he played his hand in the Senate.
Is it a coincidence that on a day the Senate was to debate the reordering of the 2019 elections, the EFCC charged Senator Abdullahi Adamu’s son with fraud? And is it another coincidence that it was the same Senator Abdullahi Adamu, whose son has been arraigned just that morning, that led the pro-Buhari Senators to walk out after the reordering passed?
Buhari used Senator Adamu’s son to control him. Yet even with that blackmail, all he could get were just 10 votes from 10 senators led by Adamu. Such a thing would never have happened to Obasanjo or Babangida. The election time table will be reordered and the inept, clueless, Stone-age dictator in Aso Rock will be booted out in 2019.

And to Tinubu, who said Presidents Obasanjo and Babangida are yesterday’s men and should join the retirees’ club, I have a question. What of Buhari? At least going by his ‘football age’ he is the same age with Babangida. We are not talking of his real age. Just his official age. So he too should join the club!

Why does Tinubu still speak from both sides of the mouth at 65? Tinubu called Presidents Obasanjo and Babangida ‘yesterday’s men’! Has he forgotten how he led APC leaders to beg Obasanjo to help them ‘navigate’ their way to victory in 2015? Who is more ‘yesterday’ than Buhari?
Is Bola Tinubu so desperate that he would believe the puerile lies he is being told by the Buhari gang that they will hand over to him?
Bola Tinubu should ask himself if there would even be a Nigeria to hand over if President Buhari gets a second term.

In his first term, things have gone so abysmally wrong that it is certain that Nigeria cannot survive another four years of such an unmitigated disaster. According to the African Development Bank, in 2017, 18 African countries grew their Gross Domestic Product above 5%. Nigeria was not one of those nations. Yet we led the pack in 2014. What has happened between 2014 and 2018? Buhari happened.

The Naira has lost 85 percent of its 2015 value, going from N195 to $1 on May 29, 2015 to N365 to $1 today. That is one Naira for every day of the year. According to the Nigerian Bureau of Statistics, 10 million people became unemployed in the last 2 years which is an increase of 150%.
Inflation jumped from 9.5% in 2015 to 17% in 2017. But nowhere else has the Buhari administration failed so spectacularly, as in the area that was expected to be his natural area of strength.

Let us look at some facts.

Now today (Wednesday February 14, 2018), we learn that a Federal Government Team has been negotiating with herdsmen and they have graciously agreed to a ceasefire!

Yes! You read me right. Ceasefire!
Can you imagine the Nigerian Government delegation to Benue saying herdsmen have ‘agreed to ceasefire’? What nonsense! Should killer Fulani herdsmen be agreeing to a ceasefire or should they be arrested and made to pay for their mass murders? What has Buhari turned Nigeria into? What is so special about killer Fulani herdsmen that the Buhari administration’s Technical Sub Committee on herdsmen crisis should be negotiating with killers?

And that is why I want to end this piece with a plea.
Everyone knows Buhari cannot win a free and fair election. But in a situation where his handpicked INEC board makes it very easy for children in the North-west to get PVC yet hard for adults in the South to get PVC, it is possible. Pause from watching #BBNaija and do everything to get your PVC.

Reno’s Nuggets
Neither my children nor I have any European names. We all proudly have ONLY African names (Reno is Itsekiri). The attitude Africans ought to have is that neither they nor their children should bear Western or non-African names since Europeans and non-Africans don’t bear African names. And don’t believe the myth that they will lose opportunities due to African-sounding names. America elected a man named Barack Hussein Obama. It does not get more ethnic than that. Streatham in the UK elected a Member of Parliament called Chuka Umunna. Also don’t be fooled by theories that Westerners will never be able to pronounce African names. Is your name more complicated than Schwarzenegger or Xiaoping? If they could pronounce those names, they can pronounce yours. If they can’t pronounce it, it is because they don’t want to!

QUOTE: What the Senate did by reordering the order of the 2019 elections is similar to what the ANC did to Zuma. It is a vote of no confidence. It is a RED CARD to Buhari. A sign of his rejection by his own party, which also happens to be the majority party in the National Assembly. Africa’s time to boot out failed leaders seems to be NOW! And the President is such a silly politician. He does not have the clout that Obasanjo has, neither does he have the charm that Babangida has. He is such a clumsy political operative. Look at how obviously he played his hand in the Senate.