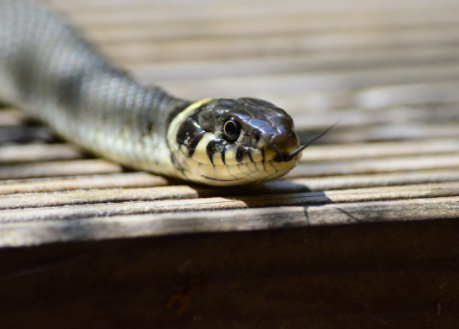 According to reports, a mystery snake is said to have sneaked into the accounts office of the Joint Admissions and Matriculation Board, JAMB, in Makurdi, the Benue State capital and made away with N36 million cash.

A team of auditors was dispatched to different state offices of JAMB to take inventory of the sold and unsold scratch cards and recover whatever money that might have either been generated or mismanaged during the period of the sale of scratch cards. On their visit to Makurdi office of JAMB, a sales clerk, Philomina Chieshe, told JAMB registrar and his team that she could not account for N36 million she made in previous years before the abolition of scratch cards.

In the course of interrogation, Philomena confessed that it was her housemaid that connived with another JAMB staff, Joan Asen, to “spiritually” steal the money from the vault in the accounts office.

She said: “I was one of the four sales clerks attached to JAMB office in Makurdi. My responsibility was to sell scratch cards to candidates and not involved in handling the revenues. It was the responsibility of Joan Asen and my other senior colleagues. I only remit money when am done selling the cards

Philomina in her confessional statement said that Joan Asen and her accomplices confessed that they have been stealing the money “spiritually” through a mysterious snake that always sneak into the office to swallow the money from the vault.

According to her “It was a mystery to me too. I have been saving the money in the bank, but I found it difficult to account for it. So I started saving it in a vault in the office. But each time I open the vault, I will find nothing. I became worried and surprised how the millions of Naira could be disappearing from the vault. I began to interrogate everybody in the house and office, and no one could agree on what might have happened to the money. I continued to press until my housemaid confessed. She said that the money disappeared “spiritually”. She said that a “mysterious snake” sneaked into the house and swallowed the money in the vault.”

See reactions of Nigrians to the viral story below...

Recall that this same JAMB remitted only about N51 million to Govt Accounts between 2010 and 2016. In 2017, under new management appointed in 2016, it remitted N7.8 Billion. Now that new management is carrying out audits at State offices, and stories that touch are emerging. https://t.co/nnEBFlKr2r

Dear Citizens of the World,

A snake just opened the vault of an examination body in Nigeria called JAMB and swallowed $102,000 which is equivalent of N36million Naira.

Am I the only one who feels animals are taking over Nigeria?

Let's prevent this before houseflies will swallow CBN.Ã°ÂŸÂ˜Â‚Ã°ÂŸÂ˜Â‚

So snakes are now swallowing JAMB money in Nigeria ehn?

Anyway, e no dey shock me anymore. As far as it happens in Nigeria I'm cool with it pic.twitter.com/SEXQsn3GhD

A mystery snake is said to have sneaked into the accounts office of the Joint Admissions and Matriculation Board, JAMB, in Makurdi, the Benue State capital and made away with N36 million cash. pic.twitter.com/yhxbFiyvCy

Question
1. What is N36million cash doing in Jamb office
2. When did money become part of the menu in a snake's diet
3. What and why is a snake here in the first place?
4. Why is this news page verified?
5. Why is Nigeria useless like this?
6. Who did we offend?
Ã°ÂŸÂ˜Â https://t.co/vo2y2acEDg

This country is a joke! Snake swallowed 36M naira in JAMB officeÃ°ÂŸÂ¤Â¦‍Ã¢Â™Â€Ã¯Â¸Â

Let’s all chill, I know someone in this country that has a snake as pet. He must have taught the snake some few moves and gave it jazz too. Tell it to go to the JAMB office and swallow the N36M. This is the only explanation that will help that story. I’m just too weak pic.twitter.com/k5dXQHzgWx

WANTED
Agwo Loro Okpogho
A Snake with a taste for cold hard cash.
Probably a big fat python with Magical Powers.
Last seen swallowing N30m at the Makurdi JAMB office.
Suspect is extremely dangerous and can possibly change into a human.
If sighted, please alert the EFCC. pic.twitter.com/Ko81VJJASS

Maybe the "Snake" that "swallowed" up N36 Million of public money at JAMB in Makurdi is hiding somewhere near the 'banks' of River Benue? pic.twitter.com/4hrkkeWhUl

So a snake spiritually swallowed N36 million in Jamb office. At this point let us sell off this country. Am done, give me my share.

Title : Nigerians react after "strange snake" spiritually swallows N36 million cash in JAMB office...lol
Description : According to reports, a mystery snake is said to have sneaked into the accounts office of the Joint Admissions and Matriculation Board, JAMB...
Rating : 5
Related Posts: Entertainment, News