» Entertainment » News » ''Half of Nigeria is now being controlled by armed herdsmen, others'' Senator Shehu Sani says

''Half of Nigeria is now being controlled by armed herdsmen, others'' Senator Shehu Sani says 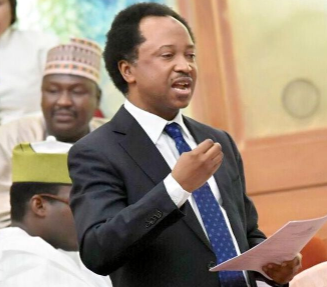 Senator Shehu Sani says going by the various attacks happening in different parts of the country, it is obvious that armed herdsmen and other militia groups are now in control of half of the Nigerian territory.

Sani who represents Kaduna central in the senate, expressed his fears when he spoke during plenary in the senate earlier today. He drew the senate's attention to the recent attacks on communities in Birnin Gwari Local Government Area of Kaduna state. According to him, Nigeria has become a theatre of war

“Part of this country is controlled by government and a part is controlled by gunmen. For how long will this continue? Violence in all parts of the country. This systematic killing is becoming widespread everywhere. How can we say over 100 years after amalgamation and over five to six decades after independence, that in countries like Niger, Cameroun and Benin Republic people there can live in safety? I am raising this issue to all the authorities that are concerned that there is a need to have a permanent military presence in this local government. Few days ago, Senator (Kabiru) Marafa raised an issue about Zamfara State. You know that Zamfara State and Kaduna State are neighbouring states. That place is virtually controlled by armed bandits and herdsmen and there is no presence of government there.

“It is time to put politics aside and focus on the issue of insecurity. People that are privileged to move to the (Presidential) Villa should please spare us the time of telling the truth to the people in power, that things are getting worse and there is the need for us to do what we need to do‎. I am deeply concerned that the government is losing the grip, that we cannot guarantee the safety of lives and properties in this country. And I think we have lost the essence of our being in government. Every day, this country is becoming a theatre of war, you see bodies of victims killed, dis-membered and shared on social media. There is nowhere in Africa today where you see these chilling and gory pictures and images being shared everyday. I am deeply concerned that the essence to which to which we should be in government and address those very important issues have not been given the required attention as they should be.”

0 Response to "''Half of Nigeria is now being controlled by armed herdsmen, others'' Senator Shehu Sani says"