» Entertainment » News » Photo: Man who brutally hacked his estranged wife and their 18 months old son to death, sentenced to death by hanging in Zimbabwe

Photo: Man who brutally hacked his estranged wife and their 18 months old son to death, sentenced to death by hanging in Zimbabwe 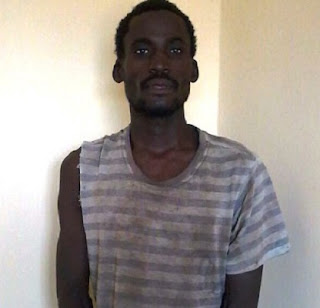 A man who hacked his estranged wife, 23 and their 18 months old son to death, has been sentenced to death.

Moyo killed his extranged wife, Lucia Maruvisa and their son Muthabisi Moyo in Mberengwa on February 23, 2017. He was arrested 10 days after the gruesome murder.

Justice Moyo convicted Moyo of two counts of murder with actual intent. Passing sentence, Justice Moyo said Moyo had planned the murder when he followed his wife who had fled their matrimonial home and was now staying with a relative at a busines centre.

“The accused butchered his ex-wife because he could not stomach her leaving him and yet she was running away from his abusive nature. He could not respect her decision and decided to punish her by death in a most brutal manner,” she said.

Justice Moyo said domestic violence cases were on the increase and this was a cause for concern.
The judge said during the two weeks she had presided over the Gweru circuit, she had dealt with three cases in which men followed their estranged wives and butchered them.

She said women in violent relationships were caught in between a hard rock and a hard surface because if they stayed or ran away they were butchered.

“Women in violent relationships are therefore not safe whether they stay or flee. Perhaps Government must come up with safe havens for women who feel threatened.

“I say so because if a woman flees, she will be followed and many a time butchered and would equally die if they stay in these marriages,” she said.

It was gathered that on February 20, last year, Ms Maruvisa had a misunderstanding with Moyo over the upkeep of Muthabisi.

Ms Maruvisa blamed Moyo, who was based in South Africa of neglecting his son. She then left their home in Mberengwa and went to stay with her aunt at Nyama General Dealer Shop which is at Neta Business Centre, also in Mberengwa.

On February 23, at around 9PM, Moyo went to the business centre to persuade Ms Maruvisa to reunite with him but she refused.

Moyo then left and returned an hour later armed with an axe and entered the shop in which Ms Maruvisa was sleeping with Muthabisi and four other children.

Inside the shop, Moyo saw a bigger axe which he picked up and struck his wife once on the head and she died on the spot.

Moyo then picked a smaller axe and axed his son and left the two bodies lying in a pool of blood and fled.

He was arrested 10 days later after police got a tip off from members of the public.

0 Response to "Photo: Man who brutally hacked his estranged wife and their 18 months old son to death, sentenced to death by hanging in Zimbabwe"