Photos: Nigerian man sentenced to 40 years in prison for stabbing his Cameroonian ex-fiancee to death in the US 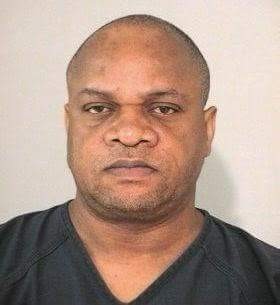 A Fort Bend County jury has convicted a 59-year - old Nigerian man for stabbing his ex-girlfriend to death in 2015.

Alohaneke was sentenced to 40 years in prison in January, 2018.

Amanda Bolin, Fort Bend County’s Chief Family Violence Prosecutor, said Evelyne Epiepang called the Fort Bend County Sheriff’ s Office on April 8, around 5 p. m. to report that her ex-boyfriend, Osa Alohaneke, had been threatening to kill her and she wanted him out of her house.

Alohaneke left but sheriff’s deputies took a report from Evelyne before she left to stay with her friend, Veronica Taku.

Around 7 p. m, Evelyne learned that Alohaneke had returned to her home and was banging on the front door.

Evelyne again called the sheriff’ s office for their assistance. Before deputies arrived, Evelyne and Veronica went back to Evelyne’ s home because they thought the defendant had left.

As Evelyne and Taku entered the front door of the home, Alohaneke appeared behind them , came inside and locked the front door.
An argument ensued and the defendant pulled a knife from under his shirt.

Alohaneke first attacked Taku, cutting her face and stabbing her so hard on the arm that it fractured a bone.

The defendant then turned his focus to Evelyne and stabbed her over 30 times. At some point, Evelyne managed to again call 911.
That call recorded her screams and pleas as she died.

After killing Evelyne, Alohaneke told Taku to go ahead and call the sheriff because he had “completed his mission"

Deputies arrived and located the defendant in the front yard with his hands covered in blood and on the phone with his attorney.

Alohaneke was tried in the 400th District Court before Presiding Judge Maggie Jaramillo. Murder is a first - degree felony punishable by 5- 99 years , or life in prison and up to a $10, 000 fine.

Under Texas law, Alohaneke must serve half of his sentence before he can be considered for parole.
Assistant District Attorneys Amanda Bolin and Lauren Valenti prosecuted the case. ttorney Eric Ashford represented the defendant.

Testifying in court on January 10, 2018, Taku narrated how Alohaneke stalked his fiancé and threatened to kill her repeatedly in the hours leading up to the murder.

Taku said Epiepang was afraid to go home. After calling police for help, Taku said she and Epiepang waited in a park for more than an hour before returning to the house to gather some clothing.

Taku said Alohaneke ambushed them at the door and pushed his way inside the house.

"I turned to him and asked ‘What is happening between you and Evelyne?’” Taku testified.

“Osa looked and me and said ‘Do you really want to know?’ and then he pulled out a knife.

Taku said she was screaming for help as Alohaneke stabbed her twice in the face and once on her arm before he turned his attention to his fiancé.

Taku testified she screamed for help through a bedroom window and watched in terror as Alohaneke chased his fiancé, tripped her and then pounced on her with the knife, stabbing her over and over until she was no longer moving.

“When Evelyne grew quiet, Osa laid down next to her. I thought he was dead too because he turned completely white, his clothes, his skin, white like a corpse, and then I passed out,” Taku testified.

Jurors listened to a recording of a 911 call about two hours before the murder wherein Epiepang told police Alohaneke had threatened to kill her over and over and she wanted him to leave her house.

A second 911 recording was played and jurors listen as a 911 operator answers and loud screams echo repeatedly in the courtroom as Epiepang is fighting for her life.

Several jurors appeared shaken by the recording and turn their eyes to Alohaneke.

0 Response to "Photos: Nigerian man sentenced to 40 years in prison for stabbing his Cameroonian ex-fiancee to death in the US"