Police arrest couple who run a baby factory in Lagos 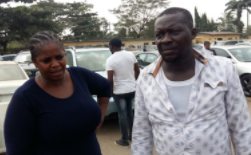 A couple identified as Adeola and Binta Adebayo has been arrested in Lagos state for operating a baby factory in their home at No. 1 Treasure Palace Close, off Hand of Fair Bus Stop, Ikotun-Igando Road.

According to the Lagos state commissioner of police, Edgal Imohimi, the suspects habour the pregnant women in their home and usually sell the children after the young women have been delivered of the babies without the mothers’ consent.

“They harboured young pregnant girls until they are delivered of their babies after which these babies are taken from them and sold without the consent of the young mothers. During the raid, three young women were rescued. They were – Favour Osikwemeh, 19, (six months pregnant), Precious Emmanuel, 27, (seven months pregnant), and Onome Oputi, 25, (nine months pregnant).The victims will be handed over to National Agency for the Prohibition in Persons (NAPTIP) for care while the couple will be handed over for possible prosecution.”

Narrating her experience to journalists, one of the rescued victims, Favour Osikweme said a friend of hers, Lepa, introduced her to the place.

“I was not told it is a baby factory. I was staying with my friend called Lepa when she told me that her place is too small and offered to take me where I will be delivered of my child. I have been there since December last year. The woman told my mum that I am working with her but we didn’t negotiate about payment for my child.”

Speaking to The Nation; another victim, Emmanuel said she was worried after getting pregnant for a foreigner and was introduced to the baby factory by her sister.

“My sister took me to the woman after I was impregnated by a foreigner. The woman then promised to settle me as soon as I was delivered of my baby,” she said.

The couple denied the allegation, saying that they were only assisting the womenin turnn-turn helped them with their business.

Speaking to Nation, Binta, who also gave her name as Nene Okoro, claimed that one of the three women was her daughter-in-law, who has lived with them for over four years.

“We are not running any baby factory. I have never sold any baby. Two of the three women only help me with my business. I sell wholesale drinks and they assist me. The other woman is my daughter-in-law, who has been living with us for over four years. If I sold babies, how come I didn’t sell my two grandchildren she had earlier. I believe some neigbours we have land dispute with are trying to frame my husband and I. I am from Abia State but my husband is Yoruba. We are innocent.”

Title : Police arrest couple who run a baby factory in Lagos
Description : A couple identified as Adeola and Binta Adebayo has been arrested in Lagos state for operating a baby factory in their home at No. 1 Treasur...
Rating : 5
Related Posts: Entertainment, News