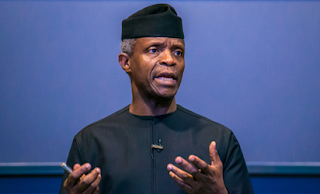 Vice president Yomi Osinbajo has decried the deplorable state of Nigerian prisons. In a scathing assessment, he said conditions are so bad that anyone who goes in comes out an animal.

The VP who was represented by the minister of interior, Abdulrahman Dambazzau stated this in Abuja during the official presentation of the Nigerian Prisons Survey Reports, a research work undertaken by Prisoners Rehabilitation and Welfare Action, PRAWA, in conjunction with Nigerian Prisons Service.

He said: “I visited the Port Harcourt prisons yesterday. While I was waiting for my flight, I chose to go to the prison. What I saw is a reflection of quite a lot of things in the survey.

“The Port Harcourt prison was built in 1918, meaning it will be 100 years old this year. For a very long time, our prisons had been neglected because that prison, when it was built in 1918 was meant to contain about 800 inmates, but today it is containing over 5,000 and I find that very disturbing.

“There was no room for prisoners and anybody who goes into that place as a human being is coming out as an animal. The major issue we are facing now is the population of those awaiting trial; pre-trial detention. Of the about 5, 000 inmates I saw in Port Harcourt prisons, over 3,700 were those awaiting trial and I spoke with a few of them as I was moving and I found that very many of them had been in prisons for five years upward without going to court. I tried to find out some of the reasons and I think in order to deal with this issue, there is the need for Departments of Public Prosecution, DPP, in the states to look at how the processes or what kind of procedures should be adopted in prosecuting criminal cases in this country.

Secondly, investigations by police or arrest procedures must be looked into in order to look at this situation because if investigation is poor, then prosecution will be defective.

Third is the court, they have a lot to do in terms of criminal trials. Cases are unnecessarily adjourned, though I know that there are over-lapping problems."