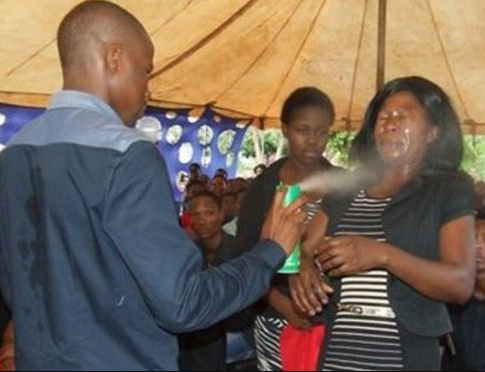 South African self-styled prophet who sprayed his followers with insecticide has been found guilty of assault.

According to local media report, Pastor Lethebo Rabalago who is widely known as the Doom Pastor was also found guilty of contravening the Agricultural Stock Remedies Act, a court ruling said.

Rabalago claims the insect repellent he used in 2016 could heal cancer and HIV.  A sentence is yet to be handed down after the verdict by Mookgopong Magistrates Court in Limpopo province.

On Friday, magistrate Frans Mahodi told the court the state had proved its case beyond reasonable doubt that the five people who laid assault charges were violated, South Africa's national broadcaster SABC reports.

The magistrate said the fact that the complainants "were sprayed on their faces with Doom makes this offence [the] worst of its kind".  He also revealed some of them had suffered "detrimental side effects... like coughing for more than seven months" after the incident.  Rabalago - who run the Mount Zion General Assembly was arrested after it emerged he had used the product to "cure" his followers of various ailments in 2016.