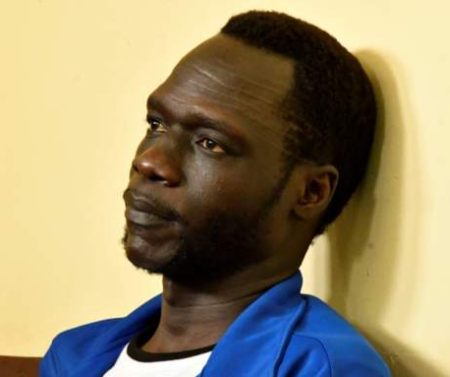 A former opposition party spokesman has been sentenced to death for treason by a court in South Sudan.

James Gatdet Dak, of the SPLA-IO, has been in detention since November 2016 when he stated his party’s support for the removal of the UN’s peacekeeping force commander in South Sudan on Facebook.

The UN troops, led by a Kenyan general, had been accused of failing to protect civilians during the war.  At the time, he was living in Kenya, where he had been granted refugee status. After the post was published, he was expelled from the country.  Back home in South Sudan, he was brought before a court and accused of treason, among other charges.

Last month, his lawyers said the trial was in violation of a ceasefire agreement between the government and rebels, which states that all political detainees should be freed. They then withdrew from the case in protest. He now has two weeks to appeal the verdict. Despite repeated truces between both warring parties, South Sudan’s conflict has continued.

Even fresh talks aimed at bring peace to the country are in jeopardy. This morning, delegates representing the rebels walked out of the discussions taking place in Ethiopia claiming government forces attacked their troops last night.