The Story of a 43-year-old Nigerian woman stuck in UK with N251.5 million hospital bill 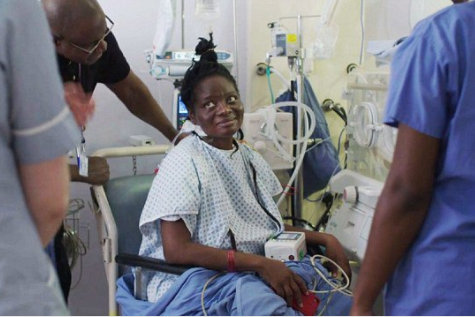 A Nigerian woman simply identified as Priscilla, who delivered quadruplets prematurely in Britain and who has racked up a bill of £500,000( N251.5m ) in one of the largest hospitals, said she will be unable to pay.

According to Mail Online, the 43-year-old new mum went into labour three months early shortly after landing at Heathrow airport in November. When first warned of the high treatment costs by overseas visitor manager Terry Facey, she says: ‘I didn’t plan to come here.  ‘It’s only money. Money can’t buy life. The last bill I had was £331,000 but even if I worked every day I would never earn that much money. My kids are priceless.’

Mr Facey, who has worked at the trust for 12 years trying to collect bills for overseas patients, says: ‘Those invoices are going to be huge 20 grand a week for each baby in intensive care.

She had intended to give birth to the babies in Chicago, in the US, where she has a family but was turned away by border officials upon arrival. They claimed that although she had a visa, she did not have required documents from a hospital stating that she had the money to pay for the birth.

Priscilla, a healthcare worker, said she was returning to Nigeria via London when she started having contractions. She was taken to the Queen Charlotte’s and Chelsea Hospital in west London, part of Imperial College Hospital, where she delivered the four babies.

One sadly died shortly after birth while another, a girl named Deborah, passed away on Saturday. The other two, Elijah and Esther, are still being treated on the hospital’s neonatal intensive care ward.

Staff estimate that the total bill for the highly complex birth and the care of the babies is already more than £500,000.  The cost of treating one baby in neonatal intensive care is £20,000 a week. Priscilla is currently staying at a hostel run by a charity and is unable to afford the bill.

Her husband is in Nigeria, and cannot come to Britain to help take care of her as he does not have enough money for a visa or the flight. Priscilla underwent IVF treatment, which has a high risk of multiple births, as she was struggling to conceive naturally due to her age.

She was told by her doctor to fly to the US to have her babies, as Nigerian hospitals do not have the ‘facilities to cater for the children’. Her case was revealed on BBC 2 documentary Hospital, which exposes the pressures of health tourism on the trust.

Title : The Story of a 43-year-old Nigerian woman stuck in UK with N251.5 million hospital bill
Description : A Nigerian woman simply identified as Priscilla , who delivered quadruplets prematurely in Britain and who has racked up a bill of £500,000(...
Rating : 5
Related Posts: Entertainment, News

0 Response to "The Story of a 43-year-old Nigerian woman stuck in UK with N251.5 million hospital bill"