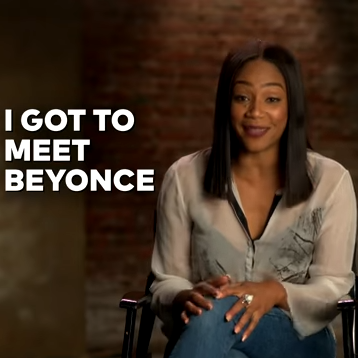 Girls Trip actress Tiffany Haddish has shared more details about the time she met Beyonce in December 2017 and this new detail gives fans an insight into the person of Beyonce.

Tiffany met Beyonce and Jay-Z after Jay's concert. She elaborated on her experience with the couple, which shows how territorial Beyonce is around her man.

Tiffany said in a preview for TV One's "Uncensored":  "I was talking to Jay-Z for a little bit. And there was another actress that was there who was also talking to Jay-Z. She touched Jay-Z's chest and Beyonce came walking up like... 'Bittchhh!' But, she didn't say that. But her demeanor, her body from the way she walked up on them said, 'Get your hands off my man's chest.' "

Tiffany added: "And so then she started talking to that actress and some other stuff happened. But I ain't gonna say nothin' yet. But it's gonna be in these streets, you gonna know."