» Entertainment » News » "He took out a knife and stabbed me in my ribs, breasts, fingers before swallowing poison" - Woman shares her story of domestic violence

"He took out a knife and stabbed me in my ribs, breasts, fingers before swallowing poison" - Woman shares her story of domestic violence 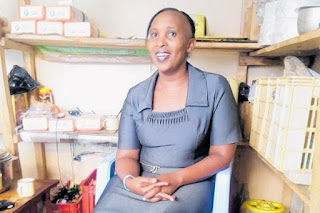 A Kenyan domestic violence survivor, Mary Nkirote has shared her story for the first time since her late husband stabbed her seven times before he drank poison, thinking she had died. Read her story below:

“My name is Mary Nkirote. I am a 39-year-old mother of two girls and one boy. These are the beautiful children I had with the man of my dreams, to whom I was married for 12 years.

“I can still remember the first time I saw him in early 2003. I was taking a hair-dressing course in Dandora, Nairobi, where he worked as a casual labourer.

"One afternoon while on my way home, I heard brisk steps coming towards me. ‘Excuse me,’ he said. I turned and was stunned. He was in blue jeans, a khaki short-sleeve shirt, and the glitter of his white teeth dazzled as he spoke. He was very handsome. ‘My name is Peter. I have been seeing you around, and wondered if I could get your name,’ he said. From that moment, we began to bump into each other regularly. “Whenever we met, I could feel a rush and my heart would beat fast.

But I was reluctant to say yes to his advances. I wanted to see if he really liked me too or just wanted to toy around with me. My reluctance fizzled out on Valentine’s Day in 2003 when he took me out for lunch. I had no doubt: I was in love. I could see us raising a happy and prospering family. After four months of a steamy relationship, we decided to move in together as husband and wife in July 2003.

“Our early marriage days were blissful. We rented a house in Dandora. He opened a small butchery while I ran a small shop in the neighbourhood. In February 2004, we had our first born daughter, Rachel. We would later be blessed with two other kids in 2006 and 2011. All through, he was not abusive. We had our disagreements but he never hit me.

“Things took a nose dive in 2014. At that time, his butchery business was not doing well. More butchery businesses had mushroomed in the area. He had lost many customers and the profits from his business kept on dwindling. On the other end, my shop thrived. I had rented a bigger space and increased my stock to include cereals, fruits and soft drinks.

“He felt threatened by my success. He feared that I would undermine his position as the man of the house. Whenever we had a minor disagreement, it would turn into a mountain. His outbursts escalated into threats of battery. Towards July 2014, things had gone so sour that instead of threatening to beat me up, he would threaten to kill me. ‘I can kill you, I’ll kill you one day!’ became regular threats.

“In December that year, he moved out of our home. He said that he could not stand to see a woman running his household. He moved to Thika where his parents lived. At first, I thought that perhaps this separation was necessary to allow us reflect on how our once blissful marriage had gotten to this point. I deeply wanted it to work. This never came to be.

“One morning in April 2015, at around 7.30 am, he came to my shop. I had just opened and was in the process of cleaning it up. I was shocked because I was not aware that he had returned to Dandora. ‘I want you and the kids to come and live with me in Thika right now. You can’t live here anymore,’ he said. I refused. I told him that I had a business which was our sole bread winner, but he stuck to his guns. An argument ensued and quickly escalated to the threats and warnings.

“Before I knew it, he grabbed me and banged me against the wall. He took out a knife and stabbed me in my ribs and breasts. I turned in an effort to get away and he stabbed me again on my back. I tried to scream but many of the shops in the neighbourhood were closed. He grabbed my hand and slashed my fingers, nearly cutting off my thumb, index and middle fingers. The pain was too much and I fainted. I would later learn that after fainting, he took out bottle of poison, swallowed it and fell next to me. He thought that I had I had succumbed to the stab wounds.

“A customer came to the shop and saw us lying in front of the counter. My blouse was doused in blood and a bloody knife was on the floor. My husband was foaming at the mouth. By then, more people had started to come out to the shopping centre. The customer screamed, alerting neighbours and passersby. We were rushed to Mama Lucy Hospital where I regained my consciousness. I was admitted for a few days, during which my seven stab wounds were stitched and treated. Unfortunately, my husband did not make it and died the following morning.

“It is now three years since he died. The pain of my broken marriage is still etched in my heart. I still run my shop and still have the same aspirations we both shared. My late husband will never get to read this, but now his kids are nearly all grown and I know that they miss him too. Our first born is in Form One while the other two are in primary school.

“There are days when I miss him so much. But I don’t blame him for what he did. Neither will I ever forget how he used to make me laugh, the joy he brought to our family, and all the happy years we had together.”

Title : "He took out a knife and stabbed me in my ribs, breasts, fingers before swallowing poison" - Woman shares her story of domestic violence
Description : A Kenyan domestic violence survivor, Mary Nkirote has shared her story for the first time since her late husband stabbed her seven times bef...
Rating : 5
Related Posts: Entertainment, News

0 Response to ""He took out a knife and stabbed me in my ribs, breasts, fingers before swallowing poison" - Woman shares her story of domestic violence"