Trial of Maryam Sanda who stabbed her husband, Bilyaminu Bello, to death in Abuja commences today 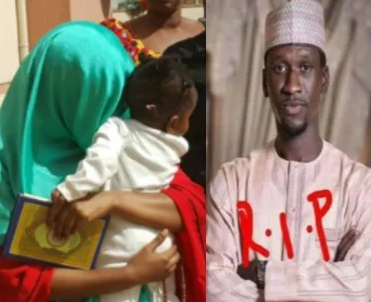 A High Court in the Federal Capital Territory will today commence trial in the case of culpable homicide against Maryam Sanda, accused of killing her husband, Bilyaminu Bello, son of former PDP chairman, Haliru Bello.

Maryam was arraigned in court in December last year by the Abuja police command for stabbing her husband to death during an arguement at the Abuja home in November 2017.

Maryam’s mother, Maimuna Aliyu, her brother, Aliyu Sanda and one other were also arraigned in court for allegedly helping to conceal evidence of the crime scene.

In count one of the amended charge, the police alleged that Maryam had caused the death of her husband, Bilyamin Bello, “by stabbing him on the chest and other parts of the body with a knife and other dangerous weapons which eventually led to his death.”

In the second count charge, it was alleged that Aliyu, Maimuna, a former Executive Director of Aso Savings and Loans and one Sadiya Aminu with the knowledge that a murder has been committed “cause evidence of the offence to disappear.” Police alleged that the trio cleaned the blood from the crime scene with the intention of screening Maryam from legal punishment.

They all pleaded not guilty to the charge. While Maimuna, Aliyu and Sadiya were released on bail, the court ordered that the breast-feeding Maryam be remanded at the Suleja prison.

The court subsequently adjourned the matter to today, February 5, 2018 for commencement of hearing

0 Response to "Trial of Maryam Sanda who stabbed her husband, Bilyaminu Bello, to death in Abuja commences today"