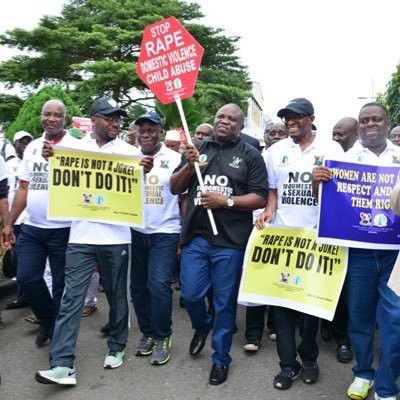 ''We are pleased to inform the general public that the Lagos State government (DPP) in the past week has been able to secure conviction in two cases of defilement. Both defendants were sentenced by OGUNSANYA J to 25YEARS and 21YEARS imprisonment for sexually assaulting children. The first case took place in 2013. The survivor’s mother briefly left her child(1year 4months) in care of the convict/ her neighbour while she went to take her bath. When she came out, she found her child pointing at her pant, when she checked, it was soiled with blood. She IMMEDIATELY reported to the police station and was swiftly referred to the Health Centre. The doctor testified that upon examination, she had been sexually assaulted. The police conducted further investigation and the case was charged to court.

The defendant was arraigned before an ikeja High court. He was charged with the offence of DEFILEMENT to which he pleaded not guilty. At the end of the trial, the judge being satisfied that the prosecution had proven its case beyond reasonable doubt found the Defendant GUILTY. The second case took place in September 2013.The defendant/convict was found in the bathroom shared by tenants in the compound.The convict was found putting his manhood into the mouth of a 3 YEAR old boy.The case was reported to the police station&the case was charged to court.

The defendant pleaded not guilty and in his statement of defence, he claimed that he was urinating when the boy came to stand beside him. On the 6th of Feb. 2018, the judge being satisfied that the prosecution had proven its case, sentenced him to 21years imprisonment.