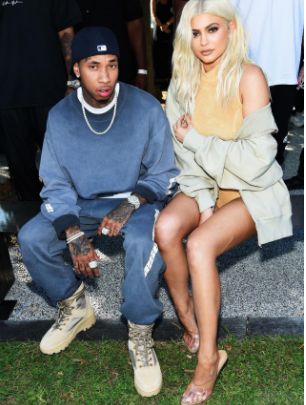 Kylie Jenner has been a mother for only one week but she's already having baby daddy drama.

According to Radar online, Kylie's ex Tyga is demanding a paternity test because he believes Stormi might be his child, not Travis'.

"Tyga wants a DNA test because he really thinks that there is a chance this baby could be his," the source reveals.

The source claims that Kylie and Tyga were still intimate nine months before Stormi was born, even though they broke things off in April 2017.

"Tyga told friends that he was still sexually active with Kylie nine months ago, when this baby was likely conceived," the source added.

The source said: "He has a lot of questions and most importantly he still wonders if there is a chance if that baby could be his. Tyga misses Kylie now more than ever, really wants to meet the baby and wants some clarity and or closure on their situation."

If Stormi is really his, "he wants to know for sure so he can man-up and be a good father, or try to move on once and for all."

Vogue reports that in September last year, Tyga was shopping in Los Angeles and was heard telling fans, "Hell nah that’s my kid" when asked about his ex-girlfriend’s pregnancy rumors. Tyga reportedly posted and then deleted a Snapchat post where he claimed Ky's baby is "my kid."

Title : Tyga reportedly wants DNA test for Kylie Jenner's baby as Stormi could be his child
Description : Kylie Jenner has been a mother for only one week but she's already having baby daddy drama.  According to Radar online, Kylie's ex T...
Rating : 5
Related Posts: Entertainment, News