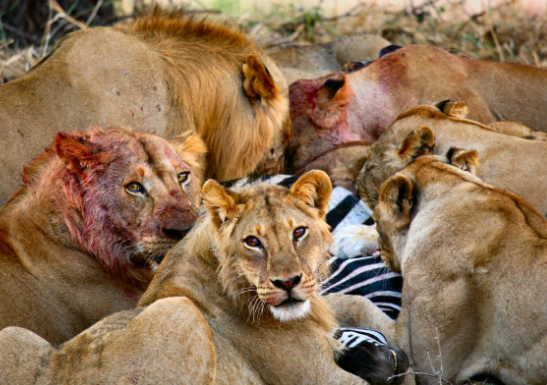 The man who was killed by a group of lions in a private game reserve near Hoedspruit, has been identified as a 50-year-old from Mozambique.

A statement issued on Wednesday by police spokesperson of the the South African Police, Lt Col Moatshe Ngoepe, said three suspected illegal poachers were attacked by a group of lions.

During this attack, the deceased was killed and eaten by the lions while the other two suspects managed to escape the attack and fled back to their home country, Mozambique. Read full statement below:

"The incident occurred on 2018-02-09 when it is believed that three suspected illegal poachers were attacked by a group lions and during that incident, the deceased was killed after being mauled by these lions."

The other two managed to escape the attack and fled back to their home country, Mozambique. They then reported the ordeal to the family.

The deceased was positively identified yesterday on 2018-02-13 at Maphutha Malatji Hospital Motuary in Namakgale outside Phalaborwa by his sister-in-law who is staying in South Africa at Humulani village in the Lulekani Policing area outside Phalaborwa.

The Sister alleged that she received a call from her family members in Mozambique who gave her the report from the two men that the deceased was killed by lions in South Africa and she must go and check with the Police.

She confirmed to the family that she also heard over the radio that there is an unknown person who was killed by lions and community members who can assist with his identification, may go to Hoedspruit Police Station and she subsequently went to the Police Station and further proceeded to the Hospital mortuary.

The deceased was then identified as David Baloyi aged 50 years from Masingiri area at Mavudza Village in Mozambique.

The police are still investigating the possibility that the deceased might have been a poacher after a hunting rifle and ammunition were found in the vicinity of the scene.

Subsequent to this gruesome discovery, the police in Hoedspruit outside Phalaborwa have since opened an inquest case for further investigations.