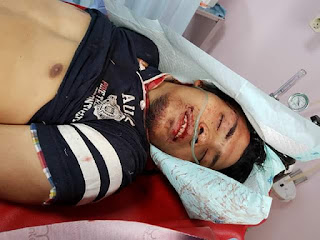 The 23-year-old man who attacked a church congregation with a sword during Sunday Mass is a radical Islamist who had wanted to fight with the Islamic State group in Syria, police said Monday.

Around 100 people were attending the service at a Catholic church in Yogyakarta province on Java island, Indonesia, when the suspect Suliyono barged in wielding a one-metre-long sword and began attacking terror-stricken people, seemingly indiscriminately. Read previous report here

Four people, including 81-year-old German-born priest Edmund Prier who was standing at the altar, were seriously injured. The extremist, who was later shot in the leg after ignoring a police warning shot, also decapitated a Jesus statue with his sword.

“Suliyono had made a passport application as he attempted to go to Syria, but the application failed. He ended up launching the attack here,” said national police chief Tito Karnavian.

He said police are still investigating whether Suliyono was a “lone wolf terrorist” or part of a group.

Indonesia, the world’s largest Muslim-populated country, is also home to significant numbers of Christians, Hindus and Buddhists but there are concerns over rising intolerance.

Extremists have mounted a series of attacks against Christians and other minorities.
In 2016 several children were injured after a man threw Molotov cocktails at a church during a Sunday service.

On 2000 Christmas Eve, the Al-Qaeda-linked Jemaah Islamiyah group staged coordinated bombings of churches in Jakarta and eight other cities which killed 18 people and injured many more.

Title : Update: Terror suspect attacked Catholic Church during Sunday Mass after failed attempt to join IS in Syria - Police
Description : The 23-year-old man who attacked a church congregation with a sword during Sunday Mass is a radical Islamist who had wanted to fight with th...
Rating : 5
Related Posts: Entertainment, News

0 Response to "Update: Terror suspect attacked Catholic Church during Sunday Mass after failed attempt to join IS in Syria - Police"