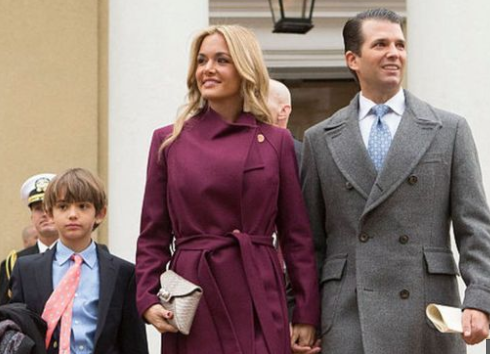 The US president's daughter-in-law, Vanessa Trump, was taken to hospital as a precaution after opening an envelope containing white powder. The letter was addressed to Donald Trump Jr, Mr Trump's eldest son, at his apartment in Manhattan.

Mrs Trump and two others at the scene were decontaminated by firefighters and taken to hospital for evaluation.  NYPD told the BBC they tested the white powder in the envelope and confirmed that it was non-hazardous.

They said that Mrs Trump did not appear to be physically affected by the substance.  Mr Trump Jr tweeted later on Monday that his family was safe and called the incident "disgusting".

Thankful that Vanessa & my children are safe and unharmed after the incredibly scary situation that occurred this morning. Truly disgusting that certain individuals choose to express their opposing views with such disturbing behavior.

The Fire Department of New York (FDNY) confirmed that three people had been transported to the Weill Cornell Medical Center. The call came to police at around 10:00 local time (15:00 GMT), according to local officials.

They said the couple's East 54th Street apartment was now being decontaminated. According to CBS New York, Vanessa Trump's mother handled the envelope, which Vanessa then opened.  The Secret Service said it is "investigating a suspicious package addressed to one of our protectees received today".

In September, Mr Trump Jr, 40, chose to forgo Secret Service protection for himself, his wife and their five children, but it was reactivated one week later