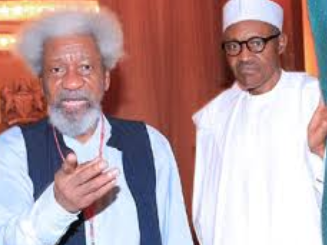 Nobel laureate, Prof. Wole Soyinka, has said President Muhammadu Buhari is in a trance. Soyinka said he came to his conclusion after taking a careful look at the various blunders the administration has made over time.

Soyinka said this when he spoke at a press conference titled, ‘Nomads and nation: Valentine card or valedictory rites.’ in Lagos yesterday February 14th. He said

''I will say Mr. President you are in a trance. Too many things are happening now which made me say that. I think he is under a trance'' he said

When asked to explain the form of trance which he thinks the President was in, the Nobel laureate said he does not know but this is can be attributed to the various blunders the Buhari-led administration has continously made.

“I don’t know. So many unforced errors. Take for instance the reinstatement of the fellow who was sacked from NHIS (suspended Executive Secretary of the National Health Insurance Scheme (NHIS), Usman Yusuf). He was reinstated by the President. What is that about? What is going on? It is a certain kind of alienation from reality is going on,” Soyinka said

He commended the state governors for supporting the call for state policing.

Title : Wole Soyinka to President Buhari ''I Think You Are In A Trance''
Description : Nobel laureate, Prof. Wole Soyinka, has said President Muhammadu Buhari is in a trance. Soyinka said he came to his conclusion after taking ...
Rating : 5
Related Posts: Entertainment, News