There is no end in sight to the evacuation of stranded Nigerian migrants in Libya as another batch of 162 youths under the Voluntary Returnees Scheme facilitated by the European Union / International Organization for Migration (IOM) arrived Nigeria in the late hours of Thursday.

The aircraft with registration number 5A-DMG arrived the Murtala Muhammed International Airport (MMIA) at 9:56 pm with 162 returnees. Three of the returnees arrived with minor medical cases.

It was however a harvest of pregnancies as 15 of the returnees arrived heavily pregnant.

Represented by the Lagos Zonal Coordinator of NEMA, Alh. Yakubu Suleiman, the DG warned prospective migrants not to endanger their lives by embarking on irregular migration.

The NEMA boss was further quoted as pointing out that migration has been part of human life from time of creation for different reasons, though it is not mandatory of intended host country to accept the migration based on the country’s national policies.

“Nigerian youths seeking greener pastures outside the shores of this country should know that they would become second citizens in their host countries except for those who entered such country through regular means that may possibly have limited rights”, he said. 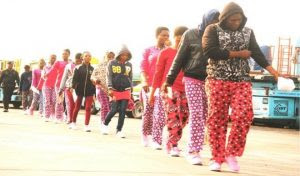 Title : 15 Of 162 New Libyan Returnees Arrive With Pregnancies
Description : There is no end in sight to the evacuation of stranded Nigerian migrants in Libya as another batch of 162 youths under the Voluntary Returne...
Rating : 5
Related Posts: freebeat, Music, News, Video