APC Crisis: Shehu Sani Speaks On Being Part Of Plot To Impeach Saraki 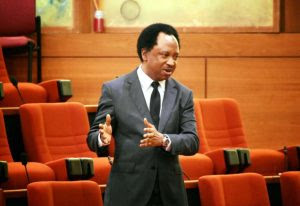 The Senator Representing Kaduna Central at the National Assembly, Shehu Sani, has denied being among those allegedly plotting to impeach the Senate President, Bukola Saraki.

The lawmaker described the reports as the handiwork of his opponents, adding that he enjoys a good relationship with the senate president and will continue to support him.

The senator said the accusations leveled against him will not work, referring to it as “cheap blackmail.”

In a statement on Thursday, the lawmaker said, “My attention has been drawn to a report by an online newspaper without a defined address that I, Senator Shehu Sani and other senators plotted to impeach the senate president, Dr Bukola Saraki on Tuesday, 24th 2018.

“I’m not aware of such plot whether it happened or not. And If there was anything like that, it stands condemned. I can never be part of any plot to impeach the senate president because there was never reason to do so.

“I enjoyed a good working relationship with Dr Saraki since 2015 till date and he has always supported and identified with me in my moments of travails and trials and I reciprocated the same to him.

“He has managed the senate with experience, responsibility and maturity and always respects my views even when it differs with his. Fifthly, Senate President and Deputy Senate President Ike Ekwerenmadu have managed the Senate satisfactorily and championed and sustained its independence.”

“My decision to remain in the APC or leave the party is my own choice to make in tandem with my conviction, conscience and the imperatives of the constituents and constituency I represent,” he said.

“I will continue to support the leadership of Dr Saraki and Dr Ike Ekweremadu till the end of the life of the eight senate. Once again, my choice of party is my business and not that of any person.”

Title : APC Crisis: Shehu Sani Speaks On Being Part Of Plot To Impeach Saraki
Description : The Senator Representing Kaduna Central at the National Assembly, Shehu Sani, has denied being among those allegedly plotting to impeach the...
Rating : 5
Related Posts: freebeat, Music, News, Video

0 Response to "APC Crisis: Shehu Sani Speaks On Being Part Of Plot To Impeach Saraki"