The Minister of Power, Works and Housing, Mr. Babatunde Fashola, has said that after an initial slowdown, due to circumstances beyond its control, the President Muhammadu Buhari administration has eventually hit the performance mode, delivering on its programmes.

Speaking on ARISE TV, a THISDAY Newspapers sister broadcast network monitored in Abuja, Fashola explained that with the ministers and other senior officials of the government settling into their offices, they had become more equipped to increase the pace of performance at their duty posts.

Comparing them to a football team, Fashola said they needed time to understand the business of governance and what was expected of them. He, however, said that as soon as they found their rhythm, they have now become unstoppable and committed to live by their electoral promises to Nigerians.

“I know how much team work required to evolve a plan. We are ready to make that explanation and defense. Ministers of government, heads of agencies are not different from a football team, they are a team in government, and some of them are just coming in, they’ve never worked in government before. They’ve never worked at federal level before,” said Fashola, in response to questions thrown at him during the feisty interview.

He further stated: “It requires time for everybody to understand what everybody feels and consult, because if you don’t have that team rolling, government is a very slow burning but deliberate fire.

“We were going to bring change, but anybody who doesn’t know that government is a very slow but deliberate fire and that because of its size, it is a behemoth that takes some time to start and when it gathers momentum, it is unstoppable.

“We have momentum, we are unstoppable, we will deliver on what we have committed to do, and the signs are in the right direction.”

Fashola equally made excuses for Buhari’s delayed appointment of ministers and officials into his cabinet, stating: “If you have run government as I have, you will look at what the president set out to do – he wanted to reduce the number of ministers – you cannot reduce what you don’t know.

“If you want to reduce 42 ministries, you meet with the ministries and that is 42 days, about one and half months done. During that period, he was travelling, trying to contain the crisis in the northeast, meeting with presidents on a regional basis.

“After meeting and taking a brief, you have to reconstitute into 24, after that you have to consult each of the states. He wanted 24 and he said so, you have to balance national interests otherwise, he would have all sorts of accusations.

“The screening took a couple of weeks, and if you factor all of that, you will fairly account for about four months that is reasonably defensible but that is not the point.”

He further took time to defend the government he serves in claiming the policy decisions it took within the first months of being in charge could not be blamed for the huge job losses the country recorded then.

The NBS data equally noted that between October 2015 and September 2016, about 3.67 million Nigerians were out of jobs, Fashola, nevertheless insinuated the government could not be largely held responsible for such job losses.

He said in this regards: “I don’t pretend that things cannot be better. It doesn’t mean that jobs are not created but that they are not created at the rate at which we are producing graduates into the market and every capital markets such as ours, there are unemployment figures going up and down.

“What we need to do is to ramp up what we are doing, increase the budget size; expand infrastructure needs; mining and agriculture.”

Asked why it took the government more than two years to come up with an economic roadmap, and if that delay was not responsible for the unsteady economic situation the country found itself, the minister said it normally took governments and countries a lot of time to come up with comprehensive economic plans.

“The growth plan has to go through the parliament and that doesn’t happen overnight. People had been laid off before we came, construction companies were laying off people before we came. It was a matter of time before it happened.

“At the time this government came in, the oil prices had drastically tumbled, and that is 90 per cent of Nigeria’s earning. Agriculture hadn’t kicked in, tax hadn’t. The point to then make is that of your major source of revenue had gone and you have states who could not pay salaries. No president comes in with cash, and you see all of the processes it takes,” he explained.

Speaking on how the government had managed the country’s infrastructure sector – road, works, housing, and electricity — which he is charged with, the minister claimed they had done well but said the country would need to steadily invest about N1 trillion annually to upgrade its electricity and transport infrastructure to a point they would be able to provide comfort for investments and economic growth.

“It is important to decide whether you want to see angels or devils. Roads are bad, we haven’t finished fixing them but I can say confidently that in every states of this country there is one road project or the other, I have been around them, there has been progress.

“People vote for a government for many reasons and people who voted for roads will tell you that unlike before, there has been some visible deployment of the nation’s resources to critical road networks. Of course those roads are very extensive and long roads, they get built some in two or four years, 500 kilometres, 320 kilometers of four, five, six, and in some cases 10 lanes, and that is man-hour by man-hour. 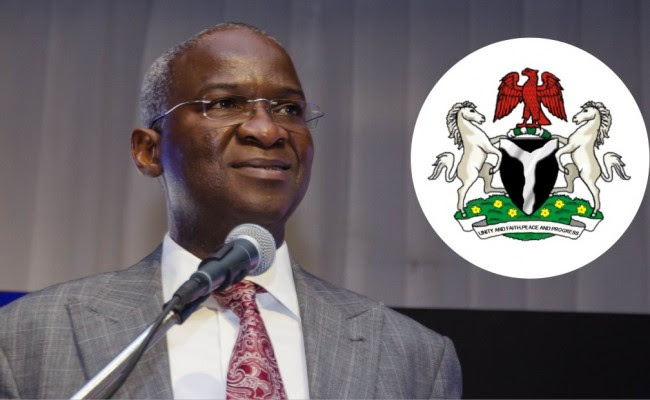 “As far as power is concerned, I think those who consume the product will tell you contrary to the intro, their circumstances have somewhat improved. Is it going to be a silver bullet? No! There is no big bang theory to solving a nations problems but I think that if you look at the nation’s growth recovery and economic plan, there are not enough platform to engage rudimentary focused debates in elections and I am happy you have created such a platform, and hope you will use it to inform and educate voters,” he said.

According to him, “The journey that we have undertaken to make Nigeria’s business environment competitive will be massively assisted if my ministry and transport ministry were getting nothing less than a trillion naira over the next few years.

“It is not enough because we met contracts in the region of about two trillion that had paid only about N500 billion and everybody is asking for one new road or the other.

“So, we need to continue and that is why the government has adopted some innovative solutions like expansion of the tax credit scheme; the Sukuk and lately approval by the president that some of the projects in the budget should be funded by funds from crimes and also green bonds that we have done to fund power projects in universities. No nation has enough money to spend anyway. It is making hard and sensible choices.”

He equally said he was confident Buhari would be lauded for his stewardship to Nigerians when he perhaps finished his term in 2023, adding: “When I was governor, nobody gave me the impression that they love me. They held my feet to fire until the finish line. The point I am making is that perhaps when President Buhari ultimately finishes in 2023, all of the Nigerian people will come round in full circle to say this really was a good steward.”