An investigation by LeadersNG into the activities of the promoters of 67millionyouth Initiative has revealed that many of them are proxy working for President Muhammadu Buhari’s re-election bid.

A presidency source who pleaded not to be named told LeadersNG that the Senior Special adviser to the president on Social Investment Programs, Ismael Ahmed is the brain behind the project.

The source further stated that many of the promoters of the project were actually those that worked for President Buhari’s emergence in 2015. The source said, it was not an easy task in convincing the promoters to get on the project as many of them voiced out their frustration with the administration and the manner they were discarded after helping the president to win the 2015 election.

Though the organizers of the project said the 67MillionYouth Initiative is a coalition of Nigerians with the mandate to galvanize active youth participation in politics and leadership in Nigeria, our source told us in confidence that the initiative is aimed at galvanizing support for President Buhari who has lost popularity amongst the youths.

Most of the Trustees of the initiative are active members of the All Progressives Congress with few others from other political parties which make up the list to make the initiative look non-partisan.

One of the trustees by name, Debola Williams co-owned the RED media with Chude Jideonwo, that vigorously campaigned for the Nigerian leader to become president in 2015.

The RED media according to LeadersNG investigation was contracted in 2014 by the then DG of Buhari’s Campaign Organization, Mr Rotimi Amaechi to help launder the image of the Nigerian leader whom many believed was a perpetual runner and unelectable leader.

On the list of the 67millionyouth are prominent APC members and artistes who have been contracted to use their huge followership to sway young people.

Most of the delegates on the 67millionYouth initiative are aides of the President, ministers, principal officers of the National Assembly and governors elected under the platform of the All Progressives Congress.

LeadersNG also gathered that one of the delegates, Nigerian R&B artiste, Bankole Wellington AKA Mr Banky W has been contracted by President Buhari’s administration to promote the president’s re-election bid under the guise of the 67millionYouth initiative. Her colleague Simi is alleged to have been contracted also.

Banky W earlier this year announced the dissolution of the record label arm Empire Mates Entertainment (EME), which he co-founded with the son of former Director-General of the Nigerian Civil Aviation Authority, Harold Demuren.

LeadersNG through a presidential source learned, the campaign organisation is in contact with many A-list artistes, many of whom are indifferent to President Buhari’s brand and have said they can’t put their careers on the line for a president who is believed to have performed below average.

However, many of the delegates LeadersNG spoke with before filing this report said they were surprised to find their names on the list as they were not informed before putting up their names.

“The organizers are just looking for a way to legitimize their fraud! I was never at anytime, a member of any youths group” . A delegate whose name was included on the list without her consent told LeadersNG.

Our Investigation further revealed that the sum of Two Hundred Million Naira (N200M) has been budgeted for the project to take off. The money LeadersNG learned was sourced from the NNPC through the SSA to the President on Social Investment Programs, Ismael Ahmed.

Meanwhile, some online commentators have taken to their twitter handles to voice their distrust with the 67millionyouth initiative.

Many of the commentators have questioned the integrity of the characters behind the initiative as majority of the trustees were the same set of youths that actively participated in bringing the current administration to power. 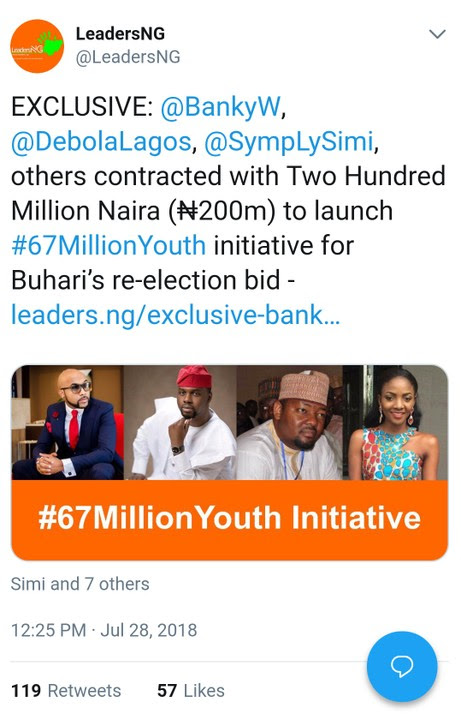