A Chinese woman Li Dandan, was on Thursday, July 26, found not guilty of drug trafficking by Hong Kong Court after three years of uncertainty.

On November 7, 2015, Li was intercepted at Hong Kong International Airport while en route to Malaysia to help deliver clothing samples for her Nigerian boyfriend identified as IK, who said he would set up business in her home province of Guangdong.

The drugs were found stored in a hidden compartment sewn into the linings of her backpack.
However, the Guangzhou native claimed she had been conned to make deliveries for her Nigerian boyfriend, whom she had trusted.
“I dated this Nigerian man because he did not smoke or drink. He struck me as a hardworking person. I could not believe he was a drug trafficker.”

Meanwhile, Li’s counsel, Leung Chun-keung, argued it was possible his client did not know about the hidden compartment as she was not professionally trained like customs officers to detect abnormalities in bag linings.

In these photos taken yesterday, Li Dandan pulled her mother in a tight embrace as soon as she emerged from a Hong Kong court’s cell holding unit, free at last from a drug trafficking case hanging over her head for three years.
Beside them stood prison chaplain Father John Wotherspoon, who had waited anxiously for Li’s release, having spent the past two years helping the Guangzhou native prove her innocence.

“I’m very happy,” he said tearfully after learning of Li’s acquittal. “I’m hoping her case can help the other drug mules appeal.”
Wotherspoon since 2013 has been working on a “name and shame” project, identifying and exposing drug lords operating through and in the city. His efforts came as he travelled the world to help drug mules facing trial.
Wotherspoon said Li was highly vulnerable in light of her divorce.

“So when he offered her a relationship, she trusted him,” he said. “She thought he was a real boyfriend.”
To help prove her innocence, Wotherspoon travelled to Malaysia, Bangkok, Thailand, and Guangzhou to track down IK, with the Nigerian’s picture in hand.

He visited the restaurant and hotel where they stayed together, found his address in Malaysia, and passed on the information to Hong Kong police. At trial, he testified for the defence as a character witness.
The Roman Catholic priest claimed about 20 mainland women had fallen victim to African drug lords over the past decade – and Li was 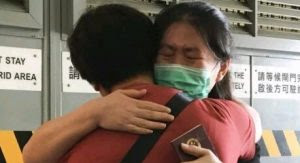