Container Of Military Wears Intercepted By Customs In Port-Harcourt (Photos)

The Nigeria Customs Service (NCS) today intercepted a container with 14 belts of Nigerian army wears. The military wears were intercepted by the Federal operation unit zone C (F O U) in Port-Harcourt, Rivers state capital. Investigations have reportedly begun into the matter.

Considering the security challenge in the country, the Customs officials said the plain military uniforms and the camouflage could be used to wreak havoc in any part of the country as they noted that terrorists and other criminals now dress like soldiers.

The items were intercepted at the Kirikiri Lighter Terminal (KLT), Port Express, Apapa, by its Area Comptroller, Mrs. Lami S. A. Wushishi.

Mrs. Wushishi, while briefing reporters, said the items were illegally shipped into the country from China.

Two suspects, she added, were arrested in connection with the prohibited items. 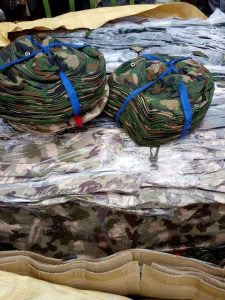 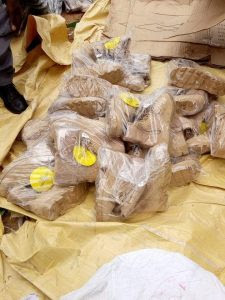 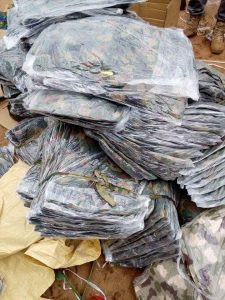