ABUJA- National Chairman of the Peoples Democratic Party (PDP) Prince Uche Secondus has expressed optimism that the party would reclaim power in Ekiti state in court.
Uche Secondus
He stated this at the 80th National Executive Committee (NEC) meeting of the party which held at the party’s headquarters, Abuja on Monday.
Briefing NEC members present at the meeting, National Chairman of the party, Prince Uche Secondus lamented the manner of conduct of the recent Ekiti State governorship election which the party lost to the All Progressives Congress, APC, saying the PDP would go the whole hog to reclaim the state in court.
“This meeting was called to review recent happenings in the country and to take critical decisions that would help salvage the country’s democracy.
“Another example of how the system has decayed under the watch of the APC is the recent Ekiti election. What happened in Ekiti was a shame and mockery of democracy. It was disgraceful.
“Let me assure our teeming supporters that we have all the polling units’ results and overwhelming records of electoral infractions by the APC, security agencies and INEC. We will reclaim our mandate in court.
“The security agencies threw decency and fairness over board, openly teargassing, intimidating and arresting PDP supporters. They chased away PDP agents, provided cover for APC thugs to snatch and stuff ballot boxes all in the bid to assist INEC to rig the election in favour of APC,” he alleged.
Bemoaning the recent killings in some parts of the country, Secondus faulted President Muhammadu Buhari’s handling of national security noting that under his watch, human lives have become worthless.
“Nigeria is truly at a crossroad. In our wildest imagination, none of us thought that Nigeria could deteriorate to the level it is today. Life is no longer worth anything with rivers of blood a constant spectacle.
“The monkeys and baboons have been truly soaked in blood. No day passes without innocent Nigerians being slaughtered in their numbers by killer herdsmen, bandits or Boko Haram. Insecurity has so worsened that people are genuinely scared to travel freely.
“Yet, this was a government that promised to wipe out Boko Haram in a matter of weeks. The lack of political will to rein in the killer herdsmen has left Nigerians and the international community in shock,” he lamented, even as he called on the party not to allow a repeat of what happened in Ekiti in the Osun governorship election.
Also speaking, chairman of the Board of Trustees, BoT, Senator Walid Jibrin said the Coalition of United Political Parties, CUPP, which recently signed a Memorandum of Understanding (MoU) would succeed in kicking out President Buhari in the event if his emergence as APC Presidential candidate.
On his part, Senate Minority Leader, Godswill Akpabio urged Party supporters to brace up for the glory that await them saying, “We may become the majority party in Nigeria very soon and we are not just going to be the majority in negotiations but also in both chambers.”
Deputy Senate President, Ike Ekweremadu sympathised with party leaders over what he called their persecution by government, urging to take the situation as a price to pay for democracy to flourish.
“We sympathies with our members unjustly persecuted. We are happy that they are alive, that is the prize for democracy.
“We cannot allow injustice in this country and that is why we are building a nation where no body will be unjustly treated,” he noted.
Present at the meeting were Deputy Senate President, Like Ekweremadu, former Senate President, David Mark, Gombe State governor, Ibrahim Dankwambo, former governors of Kano, Niger, Cross River, Katsina, Benue, Kogi and Plateau States, Ibrahim Shekarau, Ibrahim Babangida, Liyel Imoke, Gabriel Suswam, Idris Wada and Jonah Jang respectively.
Others are former Minister of Special Duties, Kabiru Turaki, ex- Defence Minister, Bello Haliru and former Senate President, Adolphus Wabara among others 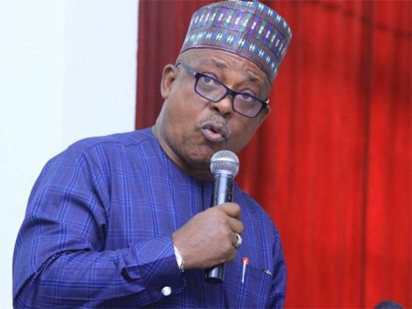 0 Response to "Ekiti : We’ll Reclaim Our Mandate In Court – Secondus"