Nigerian Universities Participating In HiFL Trolls One Another On Twitter

Just when we thought we had seen everything with Sterling Bank’s instigation of the #Bankwars, Unilag decides to change the narrative with the #NaijaUniWars. The war was a build up from the HiFL2018Draws where the 16 Teams were put against one another.

In deed and in truth, momentum grew as the first draw had Unilag Marines set against Uniben Royals. The stand-off was particularly interesting as both schools had always battled to the finish to maintain their pride and bragging rights. Unilag Marines took the first shot with a tweet declaring “we already have it on lock”, shading not just Uniben Royals but other schools involved.

Seeing Unilag Marines’ moves as a power tussle, clapbacks and shades dominated the Twitter scene as the competing schools refused to take the heat laying low. The use of memes and mind-blowing captions engaged the audience who also joined the war to show support for their various schools.

However, the question on everybody’s lips is: Will Unilag scale through this?
Who will eventually win the trophy?

The different teams also have social media handles so football lovers from the various institutions, students and alumni can follow and engage their teams online. Click this link to see and follow the different 16 team handles https://twitter.com/HiFLNigeria/status/1020395113506369536
See more conversation below:
You can check the tweets and support your school using the hashtag – #NaijaUniWars on Twitter. 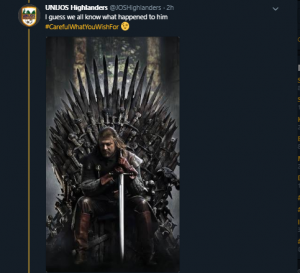 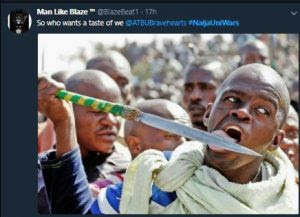 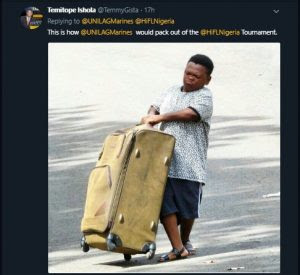