The Peoples Democratic Party has accused the Minister of Transportation, Rotimi Amaechi, and others, which it did not name, of allegedly exploiting the fragile health of President Muhammadu Buhari to spite Nigerians.

The party was responding to a claim by the former governor of Rivers State that even if Buhari contested from a sickbed in 2019, he would win in some core northern states.

The opposition party said Amaechi and others in government “actually know that the President is sick” and that Buhari did not possess the mental ability to lead the country.

The National Chairman of the PDP, Prince Uche Secondus, who spoke to our correspondent, asked Nigerians to insist on a healthy president in 2019.
He said, “If Amaechi could say that the President would win on a sickbed, then he knows the health status of his principal. He knows that we have a sick leader who will not be able to give his maximum attention to the country.

“We don’t need such a man at this critical time. We need a President who will be able to work 24 hours and read all memos, stand at meetings and debate with people and the parliament. We don’t need a figurehead president that the likes of Amaechi are praying for.

“I know that people like him want a president they can deceive, who will not be on top of happenings in their ministries and in the country. They want a president who won’t watch television and who will not read newspapers. If that is what they want, they will meet their Waterloo in 2019.”

Secondus added that the battle ahead would be between what he called a desperate cabal and Nigerians who he said “will be desirous to get freed from the grip of the wicked.”

The National Publicity Secretary of the R-APC, Kassim Afegbua, said Nigerians deserved better than a President on a sickbed to provide leadership in the 21st century.

Afegbua said, “Unknown to Hon. Minister Amaechi, Nigerians do not want a man on sickbed, hence there is a general consensus that this present leadership should quit.
“The country is terminally ill as a result of bad and ineffective leadership. Nigerians have been prevailing on the President to sit down and offer leadership, but he has been racking his brain.”

Meanwhile, the Sokoto State Governor, Aminu Tambuwal, has said he is still a member of the APC. The governor, who spoke through his Director-General, Media, Abubakar Shekara, stated this while reacting to claims by Amaechi.

Among others, Amaechi had said Tambuwal would defect from the APC, adding that Buhari would win Sokoto State without the governor in the APC.
Shekara said the governor would not take issue with the minister.

He stated, “My principal will right now, not take issue with anybody on who will win in what state, particularly Sokoto.
“Maybe, he would have reacted if the comment is centred on the candidate of another party and not the APC, which he is a bonafide member. How do you expect him to be taking issue with a fellow party member on the fortune of his party?”

Shekara also seized the opportunity to denounce speculations surrounding Tambuwal’s planned defection from the APC.
He added, “Tambuwal is still a member of the APC, and if there would be need for him to defect to another party, he would make his stand known at the appropriate time.”

Amaechi could not be reached for comments as his mobile indicated that it was switched off when one our correspondents called him. 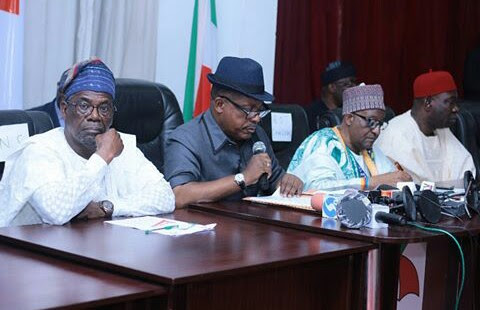 Title : Nigerians Deserves A Healthy President, PDP, R-APC Blasts Amaechi
Description : The Peoples Democratic Party has accused the Minister of Transportation, Rotimi Amaechi, and others, which it did not name, of allegedly exp...
Rating : 5
Related Posts: freebeat, Music, Video