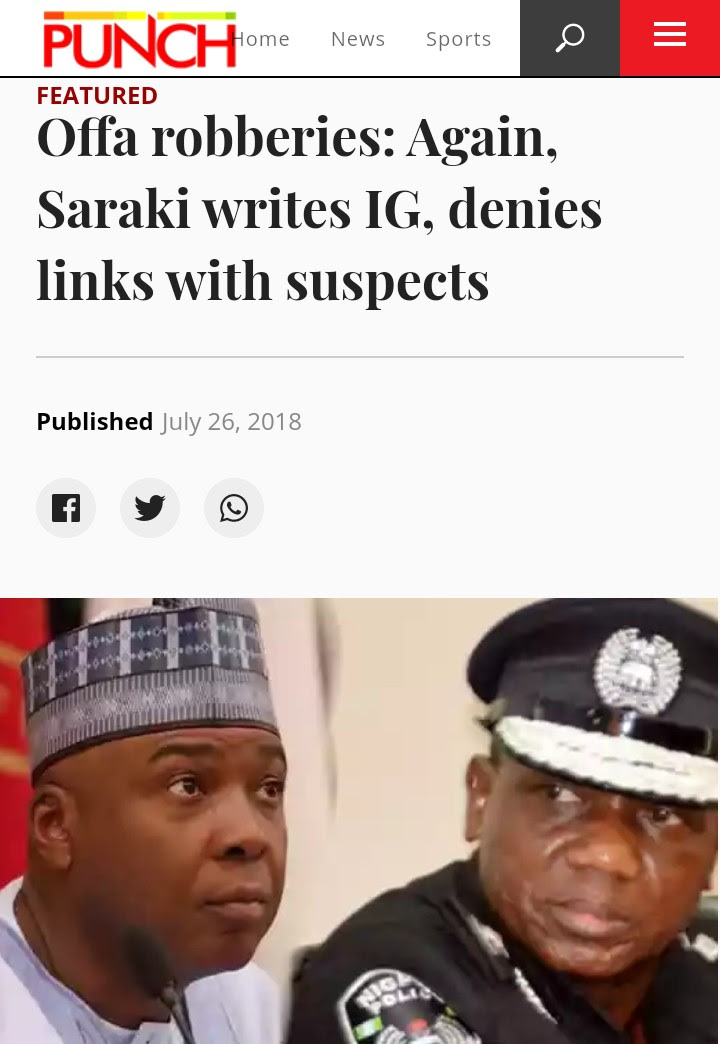 For the second time, President of the Senate, Dr Bukola Saraki, has written to the Inspector-General of Police, Ibrahim Idris, in response to his invitation to appear for an interrogation over the allegations made against him by armed robbery suspects who attacked banks in Offa, Kwara State.

The police had in June invited Saraki for questioning over the bank robberies in Offa on April 5, but the Senate President responded to the invitation in writing.

The IG, in a letter dated July 23 and addressed to the Senate President, again asked Saraki to report to the police on Tuesday at 8 am to provide further clarification on his relationship with the five leaders of the robbery gang.

Idris, in his latest letter, insisted that the gang leaders claimed they were political thugs to Saraki, adding that “the Senate President supplies arms and money to the thugs; that everyone in Kwara Central fears them because of their guns and ability to kill anybody without hesitation.”

The Senate President, however, did not honour the invitation. He had escaped the siege laid to his Maitama, Abuja residence by the operatives of the Department of State Services and men of the Nigeria Police.

Asked on Wednesday if Saraki would answer the summons by the police, his Special Adviser on Media and Publicity, Mr Yusuph Olaniyonu, said his boss had responded to the police in writing.

Olaniyonu also said Saraki had answered all the questions raised by the police in his letter to the IG.

He added that Saraki’s letter was written and dispatched to the police on Tuesday, stressing that its receipt was duly acknowledged.

Olaniyonu further stated that after answering all the questions raised by the police in his letter, he did not believe that there was any further need for Saraki to go to the police personally.

The police spokesman, Moshood Jimoh, could not be reached for comment on Saraki’s letter as he did not respond to several phone calls. He had yet to reply a text message as of the time of filing this report.

Also, it was learnt that the Deputy Senate President, Ike Ekweremadu, had written the Economic and Financial Crimes Commission requesting another date to appear before the commission.

It was learnt that Ekweremadu sent the letter to the EFCC on Wednesday.

A senior EFCC official told our correspondent that the senator noted that he wasn’t given ample time to honour the invitation and would, therefore, need more time.

The EFCC official said, “We received a letter from Senator Ekweremadu requesting another date to appear before us. We will respond to him in due course.”

Officials of the anti-graft agency accompanied by scores of policemen had on Tuesday laid siege to the Deputy Senate President’s home on Jim Nwobodo’s home, Apo Legislative Quarters, Abuja.

The EFCC operatives had attempted to arrest Ekweremadu barely hours after inviting him.

In a letter signed by the Director of Operations of the EFCC, Mohammed Abba, with a reference number, ‘CR.3000/EFCC/DOPS/Vol.49/40 dated July 24, 2018, the commission asked the Deputy Senate President to immediately make himself available for questioning.

In the letter titled, ‘Case of Conspiracy, Abuse of Office and Money Laundering’, the anti-graft agency said the request was made pursuant to Section 38(1) of the Economic and Financial Crimes (Establishment) Act, 2004.

The letter read in part, “The commission is investigating the above-mentioned case in which your name featured prominently and the need to obtain certain clarifications from you became imperative.

“In view of the above, you are kindly requested to report and interview by the undersigned at 5 Fomela Street off Adetokunbo Ademola Crescent Wuse 2, Abuja on Tuesday, July 24, 2018, at 10 am prompt.”

Ekweremadu could not be reached to confirm or deny his response to the EFCC. His Special Adviser on Media, Uche Anichukwu, was contacted via telephone on Wednesday afternoon but he asked for more time to reach out to his boss. When he was called again at 7:45 pm, he said his boss was not home.

Anichukwu had yet to reply, as of the time of filing this report, to the text message sent to him telling him about the information from the EFCC source.

In a related development, Ekweremadu has given more details on the siege to his Abuja residence by the operatives of the EFCC.

A statement by his Special Adviser on Media, Uche Anichukwu, on Wednesday, quoted Ekweremadu as explaining the situation on Tuesday when the leaders and members of the Senate and the Peoples Democratic Party visited him after the security agents had left.

The Deputy Senate President said the security agents left at about 12:20 pm after spending about six and a half hours.

Ekweremadu said, “We anticipated that a number of our colleagues in the All Progressives Congress would defect and join the Peoples Democratic Party. In anticipation of that, the APC leadership had tried to stop them. When that didn’t happen, the first thing they did was to invite President of the Senate (Bukola Saraki) to come to the police this (Tuesday) morning. They believe that once the President of the Senate goes to the police, I would be the one to preside and probably give effect to the letter of defection.

“In anticipation of that, the police, the EFCC and other security agencies came together — about 200 of them — to stop me from going to the National Assembly. They said I should come to the EFCC to give an explanation over the things I was accused of. I agreed to follow them even though there was no prior invitation, but they were not eager to let me go to answer the invitation.

Speaking to journalists at the National Assembly, Fayose said the defections from the APC were for Nigerians and not the PDP. He said the defectors had taken a “path of honour.”

Two of the 14 senators who dumped the APC on Tuesday had denied joining the PDP. While Senator Monsurat Sunmonu (Oyo-Central) said she defected to the ADC, Senator Lanre Tejuoso (Ogun-Central) said he had yet to join another party.