Ahead of 2019 general election, the people of Enugu West Senatorial District have opted to purchase the Peoples Democratic Party’s governorship nomination form for Governor Ifeanyi Ugwuanyi, in reconfirmation of their earlier endorsement of the governor’s re-election. 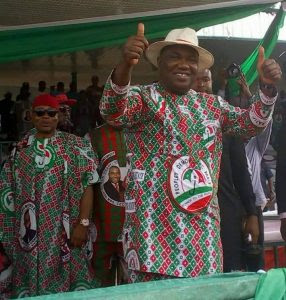 The Deputy President of the Senate, Prof. Ike Ekweremadu, conveyed the unanimous decision of the zone to Gov. Ugwuanyi at the inauguration of Gburugburu Movement Awgu Local Government Area and endorsement rally/civic reception in honour of the governor by the enthusiastic people of the council, who defied rainfall to participate in the rich and colorful event.

He added that nobody from the district would contest against the peoples’ governor, stressing that he has performed very well in office and deserves a second term, accordingly.

It would be recalled that the people of Enugu North Senatorial District had in their recent endorsement rally for Gov. Ugwuanyi, equally agreed to purchase his party’s nomination form, in appreciation of his remarkable achievements in office.

Enugu State is truly in the hands of God.