A police sergeant with the Counter Terrorist Unit in Maiduguri, Borno State, has been arrested in Barkin Ladi, Plateau State, for allegedly selling ammunition to cattle rustlers and other criminals, a report by DailyPost has revealed.
It was gathered that Sgt. Zakariah John was caught selling a round of 7.62MM Special Ammunition to a suspected rustler.
Most of the attacks and killings in Barkin Ladi, Riyom, Mangu and Bassa councils have been linked to proliferation of small arms and light weapons.
Media Officer of Operation Safe Haven Maj. Adam Umar, who paraded the suspects yesterday, said: “We have in our custody a serving police sergeant – Sgt. Zakariah John – and a suspected rustler – Sani Muhammed – both of whom are suspected to be gun runners.
“We also have in our custody Patrick Choji and Yakubu Davou who were arrested for illegal possession of firearms. We have 10 suspects in all but with various offenses, ranging from rustling, robbery, impersonation and gun running.
“They were arrested from various spots, some from Jos North, Jos South, Barkin Ladi and Nasarawa State.
“Victor Davou and Joshua Dagwom are suspected to be part of those who rustled cows in Fan district of Barkin Ladi before the attacks last month, though we are still investigating to ascertain their level of involvement.”
Narrating how the suspects were arrested, Umar said: “As we intensified our investigations following the June 23 incident, we arrested one of the rustlers and he confessed that a policeman supplies him ammunition. So he was told to ask for another supply.
“We took the suspect to the meeting point, laid an ambush, and the supplier appeared – he supplied 180 rounds of 7.62MM special. Each round of ammunition was sold for N450. It used to be N400 but according to the supplier, scarcity of the product forced him to increase the price.

“That was how the suspect was arrested and upon interrogation, we discovered he is a police sergeant serving with the Counter Terrorist Unit in Maiduguri. “This discovery will help in reducing the proliferation of arms in these troubled areas.” 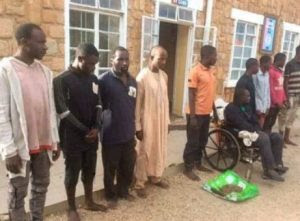