– There are ongoing plans by some All Progressives Congress (APC) senators working in connivance with the presidency to forcibly reopen the Senate ahead of the September 25 date it was officially expected to resume. 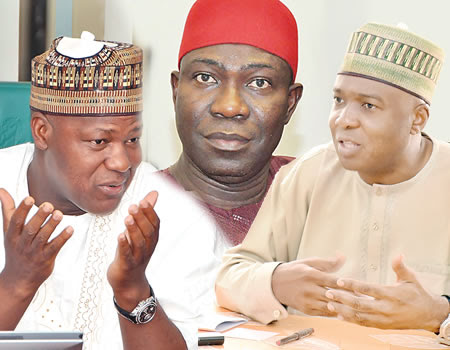 A presidency source told Daily Independent that the move was being considered in view of the suspicion that Senate President Bukola Saraki may have taken the decision for a long adjournment for “selfish reasons”.

Daily Independent gathered that the plot to have the Senate summarily reconvened with the objective of effecting Saraki and Ike Ekeremadu’s impeachment is part of the Plan B in the hatchery of those whose plot to allegedly remove them on Tuesday, last week, failed.

The source said they are seeking legal advice to this effect.

He said another reason being advanced was the anxiety of the Independent National Electoral Commission (INEC) regarding the effects of the shutdown of the National Assembly on the commission’s N242, 445,322,600 2019 poll budget.
A notable member of the Reformed APC, who confirmed the plot, said the presidency was being persuaded by some powerful individuals to forcibly reopen the Senate, impeach Saraki and his deputy, Ike Ekweremadu, and subsequently arrest them.

He said if the move succeeded, Yakubu Dogara, the Speaker of the House of Representatives, and his Deputy, Yusuf Lasun, would also not be spared.

It was gathered that leading the plot on the part of the APC senators was Ahmed Lawan, the Majority Leader, and Adams Oshiomhole, the party’s national chairman.

Our source said: “The presidency is currently seeking the opinion of lawyers and experts on how it will be possible to reconvene the Senate ahead of the September date announced by the Senate President.

Once the move succeeds, I don’t see how Saraki will remain as Senate President. The same applies to his Deputy, Ekweremadu.”

According to the R-APC member, “The general impression in the presidency is that Saraki’s adjournment is not in the interest of the APC and the country, and they feel he cannot continue to hold the APC to ransom. So, if the plot sails through, he should consider himself gone as President of the Senate.”

Nigerians at the weekend said it would be unconstitutional for the All Progressives Congress (APC) – led Federal Government to reconvene the Senate before the September 25 official date announced by Bukola Saraki, the Senate President.

While these may seem impossible, many are afraid that the government can carry out the move, especially given the role played by Adams Oshiomhole, APC National Chairman, in the siege to Saraki and Ekweremadu’s homes last week prior to the defection of 14 senators to the opposition.

Speaking with Daily Independent, Prof. Itse Sagay (SAN), Chairman of the Presidential Advisory Committee Against Corruption (PACAC), said the presidency lacked the power to reconvene the Senate ahead of the September 25 resumption date.

He, however, said if there was an urgent need for the Senate to reconvene in order to deliberate on an urgent matter such as the issue raised by INEC concerning funding of the 2019 election, the presidency could go to court to seek an order compelling the Senate to resume.

“No. the APC can’t reconvene the Senate. If the Senate decides to shut down for that period they decided to shut down, which is September 25, the executive arm of government cannot reverse it on their own.

“They may, however, resort, to court action to order them to open it, especially if there is a pressing need for them to reconvene such as the issue of funding of election,” he said.

“If they attempt that, it will be a gross violation of democratic ethos.

“If there is any conservative way in which they want to reconvene the Senate, let them show us.

“But as far as I am concerned, it is the leadership of the National Assembly that can do the reconvening and that can only be done by the Senate President or the Speaker of the House of Reps.”

Speaking in a similar vein, Balarabe Musa, elder statesman and former governor of Kaduna State, said the presidency could only appeal to the Senate President to reconvene the Senate if there was a need for them to do so.

“They can only appeal to the Senate President to come and reconvene the parliament. They have no power to do that on their own. It will be unconstitutional if they do so,” he said.

In his remark, Yinka Odumakin, National Publicity Secretary of Afenifere, said it would amount to political gangsterism and a return to military dictatorship if the executive arm of government decided on their own to reconvene the Senate.

“They lack such power and it will be political gangsterism carried to the extreme for the executive to now go and reconvene the Senate.

“Gradually, we are descending into a dictatorship which shouldn’t be since we are not under the military.

“So, I don’t think they want to carry out such act, but if they do, then that will be the end of democracy and we will be back to martial rule and military dictatorship,” Odumakin said.