APC national chairman Comrade Oshiomhole was at the Presidential Villa, to see the President after the weekly Federal Executive Council, FEC, meeting at the Council Chamber. 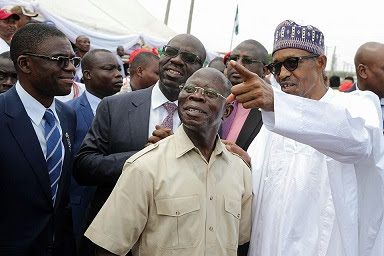 Presidency sources revealed that President Buhari was not happy with the comment by his party’s national chairman where he said that if the President was condoning indiscipline from his cabinet he was not going to condone it.

“The President was not happy with the comment of the APC Chairman because it portrayed the President as inefficient,” the Presidency source had said.

While berating the Labour Minister for not carrying out his directive that he (Ngige) should inaugurate the board of the Nigeria Social Insurance Trust Fund, NSITF, Oshiomhole said, “If the minister refuses we will suspend him from the party. You know we must return to internal discipline.

“For me it is the height of mischief for any minister, you cannot purport to be honourable minister and you act dishonourably and nobody is greater than the party. “And if the President condones disrespect for his office, I will not condone disrespect for the party.

And when we expel the minister we will prevail on the president that he can’t keep in his cabinet people who have neither respect for his own decisions nor have respect for the party.”