The Presidency has urged the National Assembly to suspend the ongoing recess and attend to requests by President Muhammadu Buhari pending before the legislature.

The National Assembly was billed to proceed on holiday on Thursday but the lawmakers went on recess on Tuesday in protest against the alleged clampdown on President of the Senate, Bukola Saraki; and Deputy Senate President, Ike Ekweremadu.

One of such requests is the one asking the lawmakers to vire funds in the 2018 Appropriation Act to fund the supplementary budgets of the Independent National Electoral Commission and security agencies for the conduct of the 2019 general elections.

Buhari had recently presented a N228bn supplementary budget to the National Assembly, asking the legislature to re-allocate part of the N578bn voted to the projects inserted by the lawmakers into the 2018 Appropriation Act.

Buhari said INEC and security agencies needed N242bn for the 2019 general elections. He asked that N164bn be vired to fund the polls while the balance of N78bn would be covered by the 2019 budget.

The President also said N64bn be taken from the same source back to the critical projects whose allocations were cut by the lawmakers.

The lawmakers had introduced 6,403 projects into the budget amounting to N578bn.

On Thursday, the Presidency pleaded with the lawmakers to reconvene and approve Buhari’s requests in the interest of the country.

Addressing journalists in Abuja, the Senior Special Assistant to the President on National Assembly Matters ( Senate), Senator Ita Enang, warned that delaying the approvals would frustrate some organs of the government.

Enang said, “The executive – President and ministers – will keep working with the legislature with respect due their offices and persons, and keep working with them as legislators of the Federal Republic of Nigeria who make laws for the executive to execute irrespective of their individual political decisions while leaving all options open for conciliation.

“We will be praying the legislature – the leadership and membership – to consider that there are many matters of very urgent nature which are pending before the legislature and unless (they are) considered, the functioning of certain institutions of the government will be hampered.

“If you recall, a lot of the funding for the 2018 budget was budgeted to come from some external sources. The request for approval to raise funds from these external sources is before the legislature and unless (it is) considered, it may hamper the level of implementation. Again, before the legislature proceeded on vacation, Mr President also laid before them the request for virement, this also will be affected.”

Enang also mentioned the $496m for which Buhari sought legislative approval to procure 12 Super Tucano aircraft from the United States. The order will be delivered in 2020.

The money is part of the $1bn security spending approved by the National Economic Council on December 14, 2017.

The President had made the request in April but the lawmakers criticised him for allowing withdrawal of the fund from the Excess Crude Account in anticipation of National Assembly’s approval.

Enang said, “Mr President had earlier on laid the request for the application of some security funds for the purchase of Tucano jets to fight insurgency that is still pending. 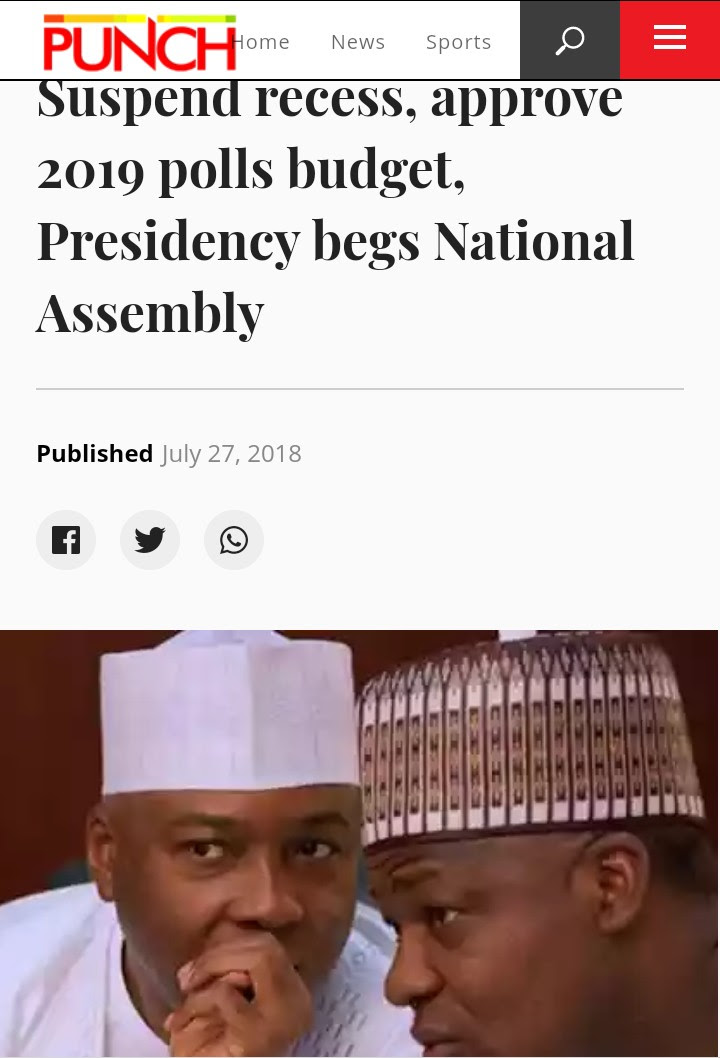 The presidential aide stated that the budgets included provisions for employment and capital spending which could affect the running and functioning of the economy.

“The executive is very law-abiding and will not do a thing which the law requires the legislature to do: to approve first before it is done, unless it is done. We will be praying the legislature to consider the emergency implications of this and decide to come out of this (recess) and consider this within the period of the vacation.

“We accept that some exigencies might have caused the abridgement of the time within which they were to proceed on vacation. We will be working with them to ensure that we have few of these considered and passed within a time that it will still be reasonable to attain the purpose of the economy,” Enang added.

But the Chairman of the Senate Committee on Media and Public Affairs, Senator Aliyu Sabi-Abdullahi, could not be reached to react to the demand from the Presidency.

Calls made to him after Enang’s briefing were not picked.

However, the House of Representatives, in its response, said the National Assembly operated on a calendar, which it must follow through.

The spokesman for the House, Mr Abdulrazak Namdas, reminded Enang that “being a veteran of the legislature,” the presidential aide was better placed to know that the National Assembly went on annual recess between July and September.”

He added, “It is not like the National Assembly was adjourned for some days that he will be asking us to reconvene. The legislature is on an annual recess and he knows that this is about the calendar.”

However, Namdas assured Enang that none of the President’s requests would suffer any setback.

“As soon as we return in September, the President’s requests will receive immediate attention. They will be the top priorities of the House. So, there is really nothing to worry about,” he added.