The economy of Venezuela, an oil exporter like Nigeria, has gone fully bonkers. Inflation projected to hit 14,000 percent this year, has been reset by the International Monetary Fund to a mind-boggling one million percent.

Prices and inflation are rising so fast that the highest denomination bank notes minted in 2016 are already practically worthless.The biggest of those, 100,000 bolivars, would have bought five kilograms (11 pounds) of rice in 2017, now it’s barely enough for a single cigarette.

“If inflation continues at 100 percent a month,” the new 500 bolivar note, which will be the largest following the currency redenomination on August 20, “will be obsolete by December,” said economist Leonardo Vera.

Currently, a pair of reading glasses can cost one billion bolivars (about $300 on the black market). It would require 10,000 of the country’s largest bank note to pay for those in cash.

Venezuelan President Nicolas Maduro: now wants to remove five zeros from the worthless currency
Some shops had resorted to weighing bank notes to determine their value rather than arduously counting them out.

Currently, a pair of reading glasses can cost one billion bolivars (about $300 on the black market). It would require 10,000 of the country’s largest bank note to pay for those in cash.

But few people could afford to buy those glasses anyway given they cost 200 times the minimum wage of five million bolivars a month.

As the country grapples with a financial and humanitarian crisis, shortages of food and medicines, and failing public services such as water, electricity and transport, President Nicolas Maduro is planning to zapping five zeros off Venezuela’s almost worthless currency. In March he had announced that he would strike three zeros off the bolivar bank notes, before upping that to five.

The question is how will this latest drastic move help drag Venezuela into recovery?

Henkel Garcia of economics consultancy Econometrica said the latest move of redenominating the bolivar is merely a “partial acknowledgement” of the hyperinflation crisis but “needs to be accompanied by economic reform in order to stop it,” said .

Venezuela has already been down this road, 10 years ago when Maduro’s predecessor Hugo Chavez tried the same trick by deleting three zeros.

“The redenomination in 2008 was a failure because we still ended up with hyperinflation,” said Asdrubal Oliveros, an economist with Ecoanalitica, another economics consultancy.

“The redenomination was made without accompanying policies to combat inflation so it didn’t tackle the causes.”

In the short term the move was a “transactional success,” said Garcia, but by “not containing inflation, that was completely lost.”

The government blames inflation on the opposition and the United States but, in reality, financing of the fiscal hole caused the monetary base to increase 250 fold in two years.

Industry and production minister Tareck El Aissami said the redenomination aims to “improve the spending power of the working classes.”

One tangible advantage, though, will be to ease the pressure on technology systems that are at breaking point due to transactions that run into billions of bolivars.

Many supermarkets, for example, have to divide sales into more than one transaction as their systems are limited to figures of 20 million.

“The monetary redenomination is to prevent the collapse of businesses’ financial systems: every transaction costs hundreds of millions or billions,” said Vera.

Practically the only product untouched by the inflation in this oil-rich country is petrol, which is why it is the cheapest in the world. A single dollar at its black market value could buy 3.3 million litres of petrol. Absurdly, once the redenomination is complete, a half bolivar — currently 50,000 bolivars, or less than two cents on the black market — would buy 50,000 litres. 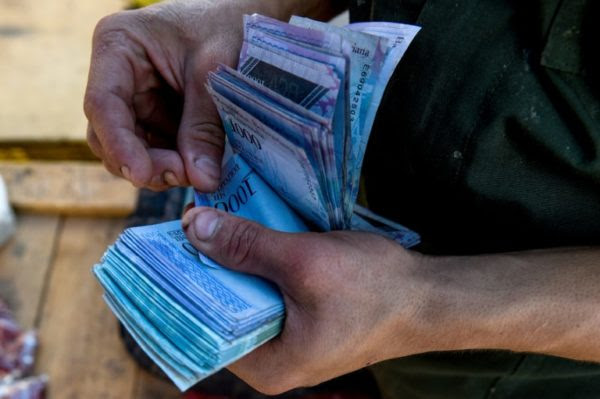 Banking is affected too, with a source telling AFP that “there’s a real possibility of collapse.”

Practically the only product untouched by the inflation in this oil-rich country is petrol, which is why it is the cheapest in the world. A single dollar at its black market value could buy 3.3 million litres of petrol. Absurdly, once the redenomination is complete, a half bolivar — currently 50,000 bolivars, or less than two cents on the black market — would buy 50,000 litres.

Such a distortion makes it likely the government will be forced to adjust the price of fuel and other heavily-subsidized goods and services.

What could complicate matters, though, is if the government decides to run the old and new currencies concurrently, affecting small payments.

Currently it costs 50 bolivars to fill the tank of a small car. That transaction under the new currency would cost a half centimo — but the bolivar subunit centimo was long made obsolete by inflation.

Maduro has shown limited signs of applying measures to confront the crisis, suggesting he might ease controls on currency exchange, currently monopolized by the government.

Imports of raw materials and machinery will be exempt from tariffs to try to encourage production in the country.

But these measures will only work “if there is economic stability that attracts investment,” said economist Luis Vicente Leon. 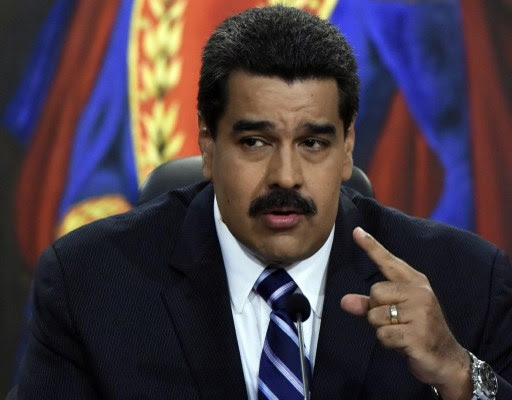